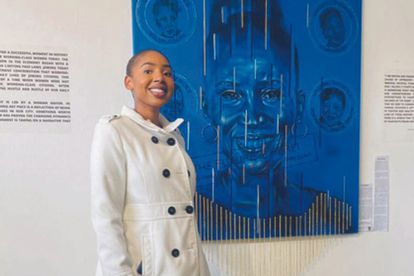 Women in male-dominated fields still experience unfair treatment and other forms of inequality, and this motivates Kganya Mogashoa (28) to fight for women’s rights through her art.

As a full-time fine artist, Johannesburg-born Mogashoa says she is passionate about addressing the lack of female representation in leadership positions and fighting the social ills that affect women.

“The art scene is still predominantly male; a lot of female artists don’t get the recognition they deserve,”

However, she acknowledges that there has been progress in the art community recently, with more women artists getting invitations to important art events.

In 2019, Mogashoa left her interior design job to follow her passion for fine art. She registered her company, Koranges Art, and currently works from a studio at Ellis House Art Building in Johannesburg.

In the first quarter of 2022, she was invited by the South African State Theatre to hold her first solo series ‘Sheroes Rands’, titled Women are the Architects of Society.

“The series highlighted various prestigious women in South Africa and around the world, including Winnie Mandela, Charlotte Maxeke and Lillian Ngoyi. I challenged the audience to think about the absence of women on our banknotes,”

She believes that these women deserve more than hospitals and streets being named after them.

“We drive past the street names every day, but we have little to no understanding of who they are, and the size of their achievements.

“My work invites the audience to think and evaluate what they believe and were taught about women,”

Her first big public art event was a live painting competition by Boundless City to revamp a park in Newtown during Women’s Month in 2019. In the same month, she was appointed by the Ditsong National Museum of Cultural History in Pretoria to live paint a portrait of Ellen Kuzwayo. The Newtown Worker’s Museum also selected one of her pieces as part of a project by Boundless City to revamp the Newtown Worker’s Cottages. Recently, she was selected as one of the top 25 creatives across South Africa by Business and Arts South Africa from 2021 to date.

Her latest highlight was auctioning her artwork in April 2022 at the Stephan Welz & Company Emerging South African Artist Auction.