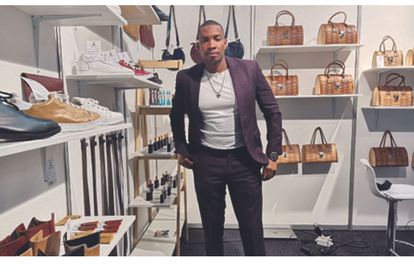 Ike Lekgoro passionate about craft and working with his hands.: Image: GCIS Vuk’uzenzele

Ike Lekgoro passionate about craft and working with his hands.: Image: GCIS Vuk’uzenzele

Ike Lekgoro (36) learnt to work with his hands from a young age and used that knowledge to become a shoemaker who is well known for the quality of his work.

“I could not afford to go to university because of financial difficulties, so I decided to open a business,” says Lekgoro.

He started small, selling his handcrafted products to in his community of Ga-Nchabeleng in Limpopo. Soon, his work drew the attention of the Fetakgomo Tubatse Municipality, which bought him a sewing machine.

That was the start of bigger things to come.

When Lekgoro was 33, he received financial assistance from the Agency (NYDA).

“They helped me a lot, because, for a start-up business, it was not easy,”

Tlotlego Handcrafts has two permanent staff and four part-time employees and mainly sells its goods through an online shop.

Lekgoro’s passion for handcrafts stems from his father, who worked with his hands. “The [products] you create start from your mind and your heart, are made with your hands. It’s a good thing and that’s why it’s so important to me,” says Lekgoro.

He says he hopes his success inspires the youth to open their own businesses and create employment, and would like to share his knowledge with others.

“The idea of business and the reality of it are different; it’s difficult, but you need to be positive,” says Lekgoro.

His dream is to own a factory so that he can produce more products at a time.

For more information about Tlotlego Handcrafts visit www.tlotlegohandcraft.co.za(link is external)