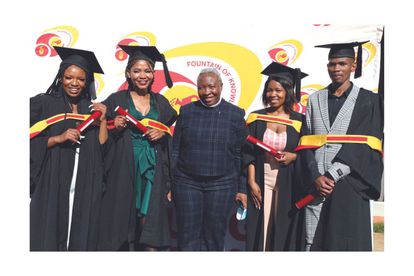 Nomalanga Sibinda (21) from Pudumong village, just outside Taung, North West, is a proud graduate who holds a Diploma of Agriculture in Irrigation from Taung College of Agriculture.

Sibinda is one of nine students who were supported through a bursary programme that was started in 2019 by North West Agriculture and Rural Development MEC, Desbo Mohono. The students received financial support to complete their three-year diploma, setting them on the path to become serious agribusiness operators.

MEC Mohono started the agricultural initiative to support young people interested in agriculture but with no financial means to pursue their studies. The bursary is offered through her office.

Sibinda is grateful that the bursary allowed her further education, something she had never dreamed of.

“I was raised by my grandmother, who was self-employed and could not do much but provide for the basics. The idea of further education was not even on my mind.”

Her high school agriculture teacher advised her to apply for the bursary.

“I applied and I was fortunate to be accepted. Even though I didn’t really consider a career in agriculture, this opportunity widened my eyes to the prospect.”

Sibinda is thrilled that many young people are modernising the agricultural sector, thereby creating interest about agriculture among their peers, especially women.

“I would like to continue studying and acquire another qualification in environmental studies. I also wish to start my own farm to help employ and groom young upcoming farmers.”

She urges other women to take up agriculture, even though it is still a male-dominated industry.

“We all know men dominate this sector, but we are on our way to take up our space. The aim is to chin up, walk tall and make the most of our inabilities seen and made able by ourselves,”

Addressing the graduates, Mohono said: “These young people have managed to grab the opportunity and have completed their diploma in record time.