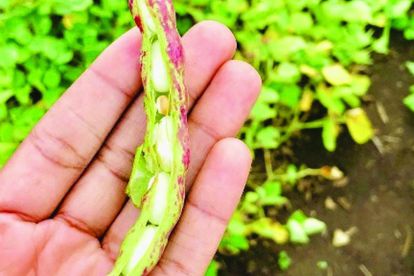 Ayanda Zulu (29) started growing beans – considered a staple food in South Africa – in 2016, on 14 hectares of land in Nongoma, north of KZN, that was made available to her by the local chief. She has been so successful that she has now been able to acquire a 500-hectare farm in Eshowe, just over two hours’ drive away.

After qualifying as a teacher, Zulu battled to find a job. This, she says, was a blessing in disguise because she ended up farming instead. After doing research and visiting farms, she chose to plant beans, which suit the dry climate because they do not need much water.

Zulu says she received funding and technical support from the KwaZulu-Natal Department of Agriculture and Rural Development in 2020, which helped her to harvest more beans to meet market demand. Growing beans was a good choice, she says, because of the little water they require and the fact that South Africans are among the biggest consumers of beans, yet very few people are producing them. Additionally, the market price is increasing. “When I first started in 2016, I was making R16 000 per ton, but within a few years, the price had doubled to R32 000 per ton,” she explains.

Zulu sells her beans by the ton, packaged into 50kg bags. Helping her with the work are 10 permanent employees, which means her farm has become a source of income for other villagers. In addition, four local TVET college students are doing their internships at the farm.

She says after gaining a good reputation in the industry, she now attracts private investors. With beans being a seasonal crop, Zulu grows cabbage and maize during the rainy season and has also started cattle farming – with a focus on beef production.

“I used to sell the beans to the locals, and they would ask if I also had cabbage. I decided to add it to the farm, especially when it is the off-season for beans. I also love livestock; it will be my biggest project going forward,”

Zulu says her new farm in Eshowe will help her become established as a commercial farmer. Although the climate in Eshowe, which is a short drive from the coast, is different to that of Nongoma, she hopes to successfully grow beans there too.

“I’m still setting up and will do soil analysis. I am hoping that some sections will allow us to continue growing beans. I have acquired so much knowledge about it and I am still learning. We plan to do our packaging [differently] so that we can maximise the profit,”

ALSO READ: Out on bail murder and rape suspects WANTED

Consider farming as a career

Zulu encourages young people, especially from disadvantaged rural communities, to consider agriculture as a business. “I think all free spaces can be used for agriculture, but we need to find what [crop] is suitable for the areas.”

Aspiring farmers must do as much research as they can – and ask questions of established farmers, before they start. For instance, she says people wanting to grow beans need to know that they must prepare the soil very well to get top-quality beans.

She stresses the importance of farmers finding the right markets to purchase what they grow, before deciding how many seeds to plant. For instance, she says, beans take only three months from sowing to harvesting, so unless you know who will buy your harvest before you plant, you could end up with a harvested crop and no buyers.

Farmers who need agricultural guidance and assistance, can contact their local Department of Agriculture and Rural Development. Get in touch with Ayanda Zulu via email: ayandamageba12@gmail.com