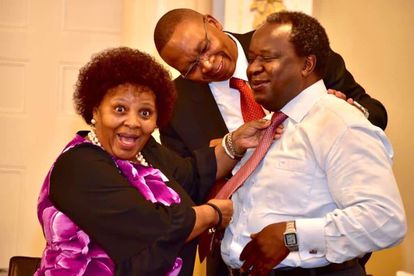 For the second Budget Speech in a row, Tito Mboweni quoted Charles Dickens as he signed off his address. It’s quite apt, really, given the political reaction to his speech. The finance minister truly has had both the best of times and worst of times on Wednesday afternoon.

The address wasn’t the bloodbath many were expecting, but it was also a bit light on substance. This topsy-turvy performance perhaps explains why the ANC’s political oppenents are a little wobbly on where they stand. There’s no collective view across the benches, but a few major parties have contrasting opinions:

“It is not a very bad Budget under the circumstances. We welcome the establishment of the state bank and sovereign wealth fund. They are EFF ideas, after all. Generally, the minister tried everything possible to give a promising budget. However, despite trying his best, there’s still no clear strategy on job creation.”

DA: Official opposition see both sides of the coin

“The Democratic Alliance (DA) welcomes today’s announcement from Finance Minister Tito Mboweni that he supports the DA’s proposal to stave off a debt crisis by cutting the public wage bill by more than R160 billion. But the minister’s primary job remains to rein in our ballooning national debt. He did not do this.

“Treasury conceded that government will not meet its deficit target, and debt will grow to 71.6% of GDP, or R4.4 trillion, by 2023. Minister Mboweni has often committed himself to stabilising debt. Now he has raised the white flag of surrender.This means we will spend R229 billion this year alone on paying interest on our national debt.”

“The overall situation is bleak. Looking at the budget shortfall, it’s gone way up – as has government debt. It’s a bad situation, but the government are not closing the door on the Government Employees Pension Fund. The ANC must be honest about whether they’re using PIC to bail out Eskom.”

With colleagues like this, one cannot go wrong. Minister of Defence and DG Lubisi sorting out my tie. Cabinet Room. Cape Town. 26 February, 2020. pic.twitter.com/W8ALy0LRW6