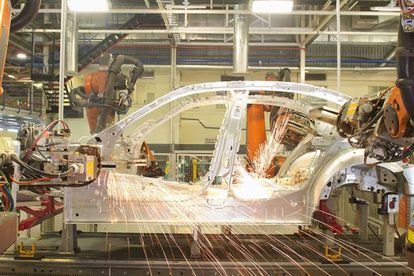 BMW’s Rosslyn Plant in Gauteng will be shutdown for a month ‘to protect employees and their families and to support society’ in its fight against the coronavirus. Photo: BMW SA

BMW’s Rosslyn Plant in Gauteng will be shutdown for a month ‘to protect employees and their families and to support society’ in its fight against the coronavirus. Photo: BMW SA

South Africa’s vehicle-manufacturing sector will be bracing itself for a slowdown in production following the decision by BMW to close its local plant at Rosslyn in Tshwane by Friday 20 March.

The facility will remain closed for a month at this stage, but the fast-moving coronavirus situation could change that.

Rosslyn manufactures the X3 sports utility vehicle for South African and international markets. Around 95% of its production is for export, with most units going to Europe and the United Kingdom (UK).

Shutdown is part of impact of BMW’s global supply chain

Therefore, the shutdown is not necessarily a reaction to declining local demand, but a result of the global coronavirus turmoil, which is impacting the operations of automakers around the world.

On Tuesday this week, the National Association of Automobile Manufacturers (Naamsa) had said that no South African vehicle assembly plants would be closed.

But this was soon overtaken by global events, as BMW Group CEO Oliver Zipse announced the following day that a number of BMW plants in various countries would be closing temporarily.

Speaking at a press conference in Munich, Germany, Zipse said demand for vehicles and other consumer goods had deceased to the spread of the virus.

“Our production is geared towards sales development forecasts – and we are adjusting our production volumes flexibly in line with demand.”

Naamsa: Impact on SA motor industry could be significant

Following the BMW announcement, Naamsa CEO Mike Mabasa said the impact on the industry could be significant.

“The longer the current situation persists, it will obviously continue to make the situation even worse and also in relation to global shutdowns.”

Mabasa believed the shutdown of the BMW plant would have a huge impact on Naamsa’s export, sales and production forecasts for this year.

Mercedes-Benz, Ford, Toyota and Volkswagen all have significant production facilities in South Africa. Some serve primarily the local market, while others are more strongly export-focused and integrated into their organisation’s global supply chain.

Global automakers are cutting back or halting production

On Tuesday 17 March the Volkswagen Group, the world’s biggest carmaker, announced in Frankfurt that it was suspending production at factories across Europe as the coronavirus pandemic hit sales and disrupted supply chains.

The company – which owns the Audi, Bentley, Bugatti, Ducati, Lamborghini, Porsche, Seat and Skoda brands – added that uncertainty about the fallout from coronavirus meant it was impossible to give forecasts for its performance in 2020.

“Given the present significant deterioration in the sales situation and the heightened uncertainty regarding parts supplies to our plants, production is to be suspended in the near future at factories operated by group brands,” CEO Herbert Diess said.

Similarly, Toyota has suspended production at European, UK and North American plants. Other brands which have suspended or cut back on production due to the coronavirus impact, include Ferrari, Ford, Fiat-Chrysler, Honda, Peugeot, Renault, Nissan and Volvo.