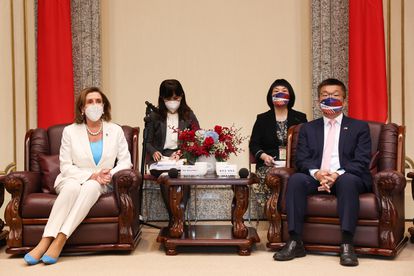 Investors monitored US House Speaker Nancy Pelosi’s movements as she landed uneventfully in Taiwan in the widely-anticipated stop on the trip that has angered China.

Pelosi, second in line to the presidency, is the highest-profile elected US official to visit Taiwan in 25 years and Beijing has made clear that it regards her presence as a major provocation, setting the region on edge.

Stock markets in Hong Kong and Shanghai led losses, shedding more than 2%, while Taipei was off more than 1% along with Tokyo.

In Europe, Frankfurt and Paris were down at the close of trading, while London ended the day flat after oil giant BP announced soaring profits.

Wall Street stocks also fell in a volatile session, with the S&P 500 shedding 0.7%.

The market selloff comes as investors try to assess the outlook for the global economy as policymakers try to bring down sky-high inflation by raising rates while trying to maintain growth.

Briefing.com described the parade of Fed speakers as suggesting the US central bank “is not on the cusp of a quick policy pivot.”

Mester and others “have been more hawkish than what’s baked into consensus assumptions,” said Art Hogan, chief market strategist at B Riley Wealth Management.

The Bank of England is also under pressure to make a more aggressive 50 bps rate hike on Thursday.

Key figures at around 2045 GMT