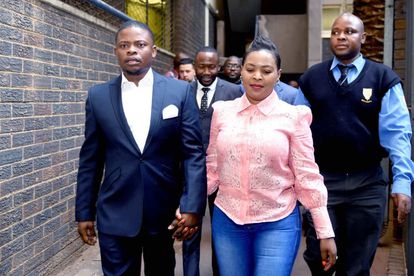 Self-proclaimed Prophet Shepherd Bushiri, his wife Mary, and three others, will know whether or not they’ll be spending more time behind bars as a decision on their application for bail is expected to be heard in the Pretoria Magistrate’s Court on Friday, 30 October 2020.

The Bushiris, Willah and Zethu Mudolo and Landiwe Sindani are at the centre of fraud and money laundering charges to the tune of R102 million.

Bushiri: ‘I’m not a flight risk’

When they appeared in court on Monday, 26 October 2020, the presiding magistrate Thandi Theledi postponed the matter to Friday, citing lack of time to properly attend to the case. The state wants bail to be denied, arguing the Bushiris are a flight risk but his lawyer Anneline Van Den Heever has argued otherwise.

The accused maintain their innocence in the case and intend pleading not guilty to the charges.

“I deny that any offence was ever committed by me. I have no reasons to run away. I have no reason to evade my trial as I need to vindicate myself,” Bushiri is quoted as saying in his affidavit.

Bushiri has already handed over his passport to the investigating officer.

The Mudolo couple was arrested on October 17 while Bushiri and his wife were taken in just days later by the Directorate for Priority Crime Investigation (DPCI), also known as the Hawks.

Bushiri’s supporters have been consisting in their show of solidarity for their leader, whom they also refer to as ‘Major One’. They have flooded the court precinct during appearances, and sometimes kneeling on the gravel road to pray for him – a gesture Bushiri certainly appreciates.

“We won’t stop thanking you for your prayers and, also, for your continued solidarity with our spiritual leaders,” a post on Bushiri’s Twitter said.

“Our spiritual leaders have arrived at the Pretoria Magistrate Court”

However the magistrate has expressed concern over the supporters gathering in their numbers, warning that they risk contracting the coronavirus.

“Most of those people are not social distancing and we are in the CBD and there is a very strong possibility that the outbreak might arise,” she said.

The Bushiris are known for their high-end lifestyle which features private jets, luxury jets and lavish homes.

It was revealed in court that Bushiri, who runs the Enlightened Christian Gathering (ECG) church earns about R566,000 a month.