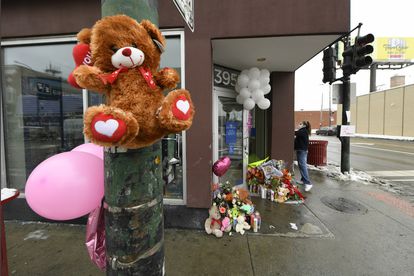 A stuffed teddy bear hangs from a light pole while Karla Chavez, of the social activist group Chiactivists, puts up a sign at a memorial for 8 year old Melissa Ortega in Chicago on January 24, 2022. – Ortega was walking with her mother in Chicago’s Little Village neighborhood on January 22 when she was struck by stray bullets after an unknown offender shot multiple times in their direction. Photo: Paul Beaty / AFP

A stuffed teddy bear hangs from a light pole while Karla Chavez, of the social activist group Chiactivists, puts up a sign at a memorial for 8 year old Melissa Ortega in Chicago on January 24, 2022. – Ortega was walking with her mother in Chicago’s Little Village neighborhood on January 22 when she was struck by stray bullets after an unknown offender shot multiple times in their direction. Photo: Paul Beaty / AFP

In addition to the people killed in suicides or the homicides hitting record levels in some US cities, an untallied number of other victims are struck by bullets that weren’t meant for them.

The deaths can spark fleeting spurts of media and police attention — similar to the nation’s recurrent horror over mass shootings – only for the focus to ebb until the next tragedy occurs.

“It happens so regularly,” said Chris Herrmann, a gun violence expert at John Jay College of Criminal Justice in New York City. “If this happened in a foreign country, it would be headline news.”

The southern US city of Atlanta was the scene of two cases this month.

A 31-year-old British astrophysicist named Matthew Willson was in bed on January 16 when he awoke to sounds of gunfire outside his girlfriend’s apartment – and was fatally shot moments later.

“It’s impossible to comprehend how it is even true,” his sister Kate Willson told The Atlanta Journal-Constitution newspaper.

About a week later Kerri Gray was driving with her six-month-old son Grayson Fleming-Gray when she heard a noise and two cars raced past.

“There was no shattered glass, there was no crying. It was instant,” she told reporters after her child’s killing.

Days earlier, eight-year-old Melissa Ortega was walking down a Chicago sidewalk on the afternoon of January 22 when one man tried to shoot another, but killed her instead.

“He took away my purpose for being. The reason I got up every day. He took away a life full of dreams,” the girl’s mother Araceli Leanos told Univision TV in Spanish.

The FBI and Centers for Disease Control and Prevention said they do not track stray bullet deaths in the United States, where some 40,000 people die annually due to guns, a majority of which are suicides.

‘BULLET IN HIS HEAD’

US law enforcement statistics differentiate between accidental and intentional slayings, but not the exact circumstances.

Herrmann, the gun violence expert, estimated stray bullet killings were one to two percent of the total of firearms deaths and increased or decreased along with the total number of shootings.

America’s gun violence problem has surged since the pandemic and racial justice protests in 2020 -– and toward the end of 2021 major cities like Philadelphia, Austin, Columbus and Indianapolis reported annual record-breaking numbers of homicides.

Though the national level of killings were still below the spikes of the 1980s and 1990s, they increased in 2020 at a rate not seen since national records began in 1960.

At the same time, firearms sales set a record in 2020 with nearly 23 million sold followed by nearly 20 million sales in 2021, according to the Small Arms Analytics & Forecasting consultancy.

Millions of those weapons went to first-time owners, who experts worry could lack safety training.

“A lot of inexperienced people handling guns is always a recipe for disaster,” said Peter Squires, professor of criminology at the University of Brighton in Britain.

This flood of weapons can also unleash a hail of celebratory fire into the sky, to mark a holiday or special occasion.

“But the bullets come down and hit people often a mile from where the gun was fired,” he noted.

Yet it’s the bullet intended for someone else that makes many victims.

Tiffani Evans, 34, was outside a relative’s home in the state of Maryland, not far from the nation’s capital Washington, enjoying dinner on a warm night in August when her son Peyton was killed.

The eight-year-old football player was inside the house eating and playing video games as the shooting started as part of a violent rivalry that had nothing to do with the boy.

“My son was sitting at the table with his head down, with a bullet in his head,” Evans said, recounting the moment she ran in to check on him.

She sees this kind of violence stemming from a series of problems: lack of government resources to keep young people on the right path and parents failing to teach the sacred value of human life in addition to illegally-owned firearms.

By Joshua Melvin and Lea Dauple