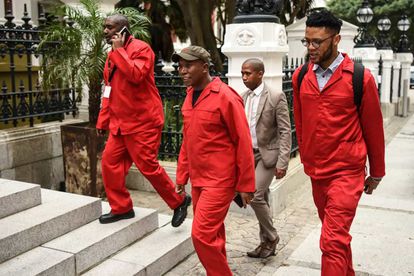 It’s tough to know where to start on this one, but Julius Malema delivered a semi-automatic round of criticisms against Public Enterprises Minister Pravin “Jamnadas” Gordhan, calling him a “corrupt stooge of the billionaires secretly running South Africa”. And that was just him in second gear…

Malema delivered a speech that rattled the walls of Parliament during Cyril Ramaphosa’s budget vote. After both the president and DA leader Mmusi Maimane put their two-cents in, Juju took the podium – and left nothing behind. The epic diatribe against Gordhan was coupled with swipes at Cyril’s leadership and Mzansi’s capitalist model.

But what stood out above all else was Julius Malema’s insistence on regurgitating the conspiracy theory that US billionaire George Soros has been trying to fund “regime change” in European countries. Despite being on separate ends of the political spectrum, Malema was sharing something championed by Donald Trump last year.

You’ve guessed it, there’s absolutely no substantial evidence to link Soros to such activities. But both divisive political leaders have used it for cheap point-scoring, as Parliament heard on Wednesday:

“For all we know, the first international donor who will jump into the opportunity to fund the NPA is the USA billionaire George Soros through his Open Society Foundation.”

“Countries like Hungary and Turkey have banned Soros for pursuing regime change agenda. Because he does not respect the self-determination of other people’s of the world, just like he actively funded regime change in Zimbabwe.”

Malema was initially fuming at the news that the National Prosecuting Authority (NPA) were allowed to accept donations from private companies. Fearing that it could encourage companies to “buy and sell their way out of trouble” in South Africa, the EFF leader teed off. But he soon returned to a subject even more dear to his heart.

His criticism of Pravin Gordhan was predictably extensive. It’s the first time Julius Malema has been able to speak in Parliament since more than a dozen red berets confronted PG in the house last week. He showed no mercy to the minister, referring to him as “Jamnadas” throughout – Gordhan’s middle name.

“Anyone, who honourable Jamnadas does not want, he engages in illegal activities to destroy their image. The Public Protector has confirmed there is an illegal and extremely dangerous intelligence unit that was established by Mr. Pravin Gordhan in his previous job as SARS Commissioner.”

“We are not going to held at ransom here by Pravin. We are not scared of him. The same you were scared of Zuma, we took him on, we dropped him, today he is sitting in the commission there like a lost soul. We will do the same with Jamnadas.”

#CIConBudgetVote Malema: What type of a President are you, who even when presented with hard core evidence of the most dangerous activities of Honourable Jamnadas, you still do not act?

The wrath of Juju:

He didn’t leave things there, either…

More of a rant than a speech, Julius Malema eventually returned to the subject of the budget vote. Not that he had much to praise: The political firebrand demanded that the education curriculum goes through a decolonisation process, while land expropriation is accelerated and the SA Reserve Bank is nationalised.

Apart from all that, there really wasn’t much to say…