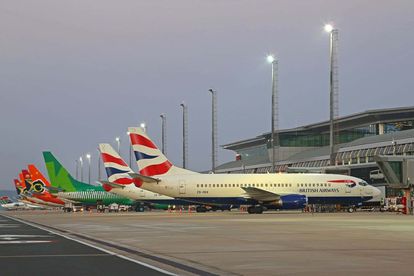 Three of South Africa’s airlines will suspend all operations from 5 July. Image : File

Three of South Africa’s airlines will suspend all operations from 5 July. Image : File

British Airways announced the introduction of the route to a global audience today (Tuesday, May the 8th 2018), while at the same time  the MEC of Economic Development, Tourism and Environmental Affairs, Mr Sihle Zikalala, announced the long awaited decision to delegates attending Africa’s Travel INDABA in Durban.

The route is a huge leap forward for the tourism sector, propelling foreign direct investment, improving business connectivity and ensuring the economic empowerment of South Africans.

MEC Zikalala said BA’s decision will allow KwaZulu-Natal to showcase itself as a tourism and business destination to a global audience, “The sheer diversity in travel and business opportunities that visitors can access through this gateway into the province of KwaZulu-Natal will unlock enormous potential.”

Of the rich history Great Britain and KwaZulu-Natal share he said, “We are excited to be able to rekindle that relationship with the launch of this new route. The investment and trade opportunities presented by this direct flight between Durban and London will undoubtedly add value to our economy.”

MEC, Zikalala said KwaZulu-Natal was eager to showcase the province’s various tourism products and experiences, including some of the world’s most pristine natural habitats, which are enhanced by two World Heritage Sites, namely Ukhahlamba Drakensberg mountain range and St Lucia.

Zikalala added that international cargo through Dube Cargo Terminal had experienced continuous year-on-year growth, which amounted to  a 138 % increase in volumes since 2010.

“The introduction of new passenger flights to Durban saw a growth of  a 25 % in cargo volumes, as well as an increased frequency of chartered aircraft. In the 2017/218 financial year cargo growth reached 12 %,” he said.

The announcement was also warmly welcome by eThekwini mayor, Cllr Zandile Gumede, who said it underpinned the council’s strategy to attract visitors and investors from the UK and European market to Durban.

“This flight will create an enabling environment for our city to do business with our European partners with ease,” Gumede said. About 90 000 passengers currently fly indirectly between Durban and London via Johannesburg or other hubs like Dubai.

Phindile Makwakwa, Acting Chief Executive Officer for Tourism KwaZulu-Natal, said the UK was already KwaZulu-Natal’s top international market and the direct flights would be a boost to arrivals in the Province, both for leisure tourists and  business travellers.

“Moving people fosters the movement of capital which means that the economy is active and thriving.  When people make travel decisions, ease of connectivity is high up on their list of considerations. This direct link between the two cities will most certainly make our destination easier to package and sell.”

King Shaka International Airport is located in a precinct which is experiencing rapid growth due to the business opportunities created through Dube TradePort Special Economic Zone.
While business will flourish, direct flights also offer locals more choice and the opportunity to connect to cities and countries around the world, Makwakwa added.

Hamish Erskine, CEO for Dube TradePort, said the Durban – London air service was in line with the global trend where airlines were increasingly flying directly into major secondary cities from global economic hubs. “This presents an enormous opportunity for both destinations to grow business, trade, investment, cultural and tourism links.

Currently, there are some 90 000 passengers flying between London and Durban every year, King Shaka International  also saw passenger volumes reach 5.6 million for the first time in the last financial year.  ” Erskine said.

South African exports to the UK make up 4.5% of the country’s total exports. The US and the United Kingdom are the thirds and fourth largest air cargo trade routes in and out of KZN.

“We foresee a healthy demand on the UK route, as it stands airfreight volumes between Durban and London are in excess 1500 tons per annum, this is expected to increase substantially with additional volumes into the US markets connecting via British Airways London hub,” Erskine said.

“It is a gateway to many nature reserves, parks and historic sites, and has a thriving food, drink and art scene; defining the city as a must-visit for culture and adventure,” Cruz said. 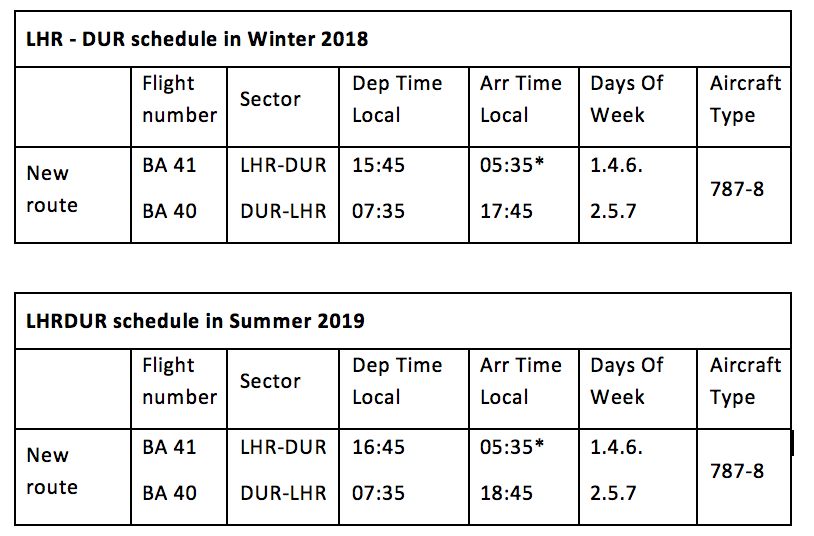