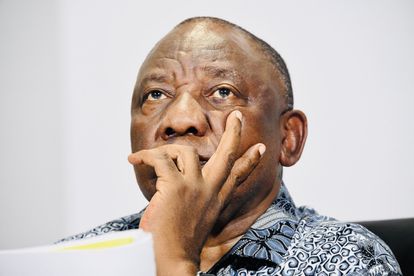 President Cyril Ramaphosa participates virtually in the 35th Ordinary Session of the Assembly of the Heads of State and Government of the African Union (AU) taking place from 05-06 February 2022 in Addis Ababa – Photo: GCIS / Flickr

President Cyril Ramaphosa participates virtually in the 35th Ordinary Session of the Assembly of the Heads of State and Government of the African Union (AU) taking place from 05-06 February 2022 in Addis Ababa – Photo: GCIS / Flickr

If Cyril Ramaphosa, like his critics speculated, was actually sweating about the release of the final part of State Capture Report, then the president will need to take on board some more fluids on Thursday morning – because Raymond Zondo DID NOT go easy on him.

Ramaphosa denied earlier this week that he had tried to influence the findings in the report, by making a phone call to the Chief Justice on Monday. Although, if the ANC leader was trying to lean on Mr. Zondo, he did a pretty terrible job – because there was no holding back here.

In total, CJ Zondo made EIGHT damning findings against Ramaphosa, criticising everything from his ‘opaque and gap-filled testimony’ at the State Capture Inquiry, to the controversy surrounding his CR17 campaign funds. If you’re a big Cyril fan, you might want to look away now…

‘Opaque, troublesome, irresponsible’: What did Raymond Zondo say about Cyril Ramaphosa in the State Capture Report?

“His repeated claim that he was in the dark about his campaign funding has potentially troublesome implications. It was his responsibility to ensure funds were solicited and used transparently.”

“He and others were unwilling to damage the ANC by publicly going against it. As the deputy president, he surely had the responsibility to do so.”

“President Ramaphosa did not state outright who would have removed him from his position had he opted to be ‘more confrontational’.”

“The president did not dispute the contention that this proves that the ruling party were firmly controlled by those complicit in State Capture. Indeed, it was political project – not isolated, opportunistic acts of corruption.”

“Very serious findings were made against Arthur Fraser. Yet in April 2018, he was redeployed by Ramaphosa to be the Commissioner of Correctional Services. Ramaphosa confirmed that he knew of some of the allegations against Fraser.”

The question of what Cyril Ramaphosa knew at the time is still somewhat opaque… His answers, unfortunately, leave some important gaps.”

Why didn’t he act, Zondo asks…

“The wealth of evidence before this Commission suggests Ramaphosa knew much about State Capture. There was surely enough credible information to prompt him to act on a number of serious allegations. As deputy president, he had the responsibility to do so.”

“Ramaphosa was the deployment committee chairman for five years. He oversaw many appointments, and the excess of State Capture. This is the period where the party couldn’t provide records. Ramaphosa cannot focus on the future. He must take responsibility for the previous era.”