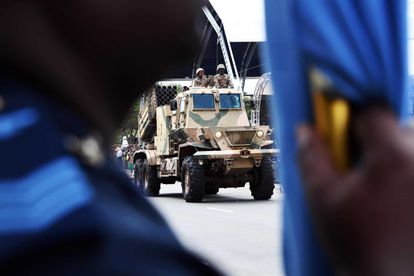 Infamously, SANDF were deployed to maintain the lockdown regulations during the early days of the COVID-19 pandemic – Photo: GovernmentZA

Infamously, SANDF were deployed to maintain the lockdown regulations during the early days of the COVID-19 pandemic – Photo: GovernmentZA

Blimey, this is moving quickly. An alleged ‘leaked document’ from the SA Army has been circulated on Monday. It revealed that the military is now on ‘high alert’ for the possibility of widespread unrest across South Africa. This, after a series of violent protests erupted in several crime hot-spots.

Will Ramaphosa ‘send in the SANDF soldiers’ to quell unrest?

In what has been a tumultuous winter for Mzansi, tavern shootings and gang rapes have mobilised gatvol communities. Coupled with the cost of living crisis, those who were on the brink beforehand have now been pushed over the edge – and it’s overwhelming local police forces.

Earlier on Monday, we learned that President Ramaphosa was ‘considering a domestic deployment’ of the SA Army, in order to quell any further unrest. However, it now looks like we are MUCH closer to this scenario than anyone first thought.

Darren Olivier, a Director for the African Defence Review, is convinced the leaked document is legitimate. Although it’s rare for ‘restricted’ SANDF instructions to be made public in this fashion, it’s not unheard of – and much of the information it contains is consistent with recent military moves.

Not often that an SANDF warning instruction to units gets leaked.

This appears to be legitimate, both in its formatting and content and the confirmation of key details by Erika Gibson for TimesLive.

Separately, a number of SANDF bases have gone on high security alert as well. https://t.co/xfkZsJ6Q4o

What does the leaked SA Army document actually say?

It reveals the deployment will initially be a modest one, and preparations are being made for soldiers who get the call. It seems ‘crowd control’ and ‘military presence’ will be key features of this potential operation.

“The situation in South Africa is gradually deteriorating into unrest, due to criminality taking place within its borders. However, this is being exacerbated by a perceived lack of action from security forces. The SA Army might be called upon to play their secondary role to support SAPS.”

“Therefore, our Infantry has been ordered to go on 25-hour standby, in anticipation of deploying in support or cooperation with SAPS. Our aim is to give warning to the SA Army to prepare and provide combat-ready forces to help the police quell any form of unrest that may arise.”