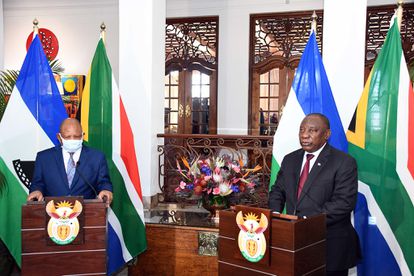 This WOULD be interesting. There have been renewed calls for two neighbouring nations to join as one with South Africa this week – and some are now questioning how Lesotho and eSwatini can ‘survive on their own’.

Herman Mashaba found himself as the chief inquisitor this week. The ActionSA leader and former Mayor of Johannesburg isn’t scared to make a contentious statement or two, and he certainly hasn’t become a shrinking violet on this issue.

Taking to Twitter, the firebrand politician said he hoped that leaders of both nations would ‘accept proposals to incorporate’, doubting that they had the economic stability to prosper in the future. Mashaba also slammed ‘selfish leadership’ for holding Lesotho and eSwatini back.

“I don’t know how Lesotho and [eSwatini] are not part of South Africa. It is practically and economically impossible for these countries to survive on their own. The elephant in room: Will the leaders of these two countries accept proposal to incorporate?”

“I know they are historical nations, but can they economically sustain their current geographical independence? The citizens of these countries are the victims of selfish leadership. If they had the interest of their citizens, they would reconsider.”

Although eSwatini doesn’t always get dragged into this conversation, the concept of Lesotho becoming South Africa’s 10th province is nothing new. In January 2020, former Finance Minister Tito Mboweni suggested that SA should ‘remove its border’ with the Mountain Kingdom.

As the only country on the planet that’s completely enclaved by one other country, Lesotho has a unique geography – putting it’s independence and sovereignty up for debate at regular intervals.

Although Mboweni later back-tracked on these remarks, Herman Mashaba seems happy to carry the torch instead:

I know they are historical, but can they economically sustain their current geographical independence?
The citizens of these countries are the victims of selfish leadership. They had the interest of their citizens, they would reconsider https://t.co/3EQ0uYzXxK