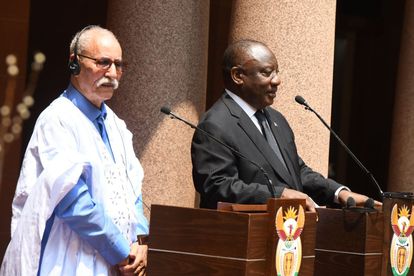 The president now finds himself in a diplomatic row with Morocco – Photo: PresidencyZA / Twitter

The president now finds himself in a diplomatic row with Morocco – Photo: PresidencyZA / Twitter

Cyril Ramaphosa is usually a man who prides himself on his diplomatic credentials. But no amount of smooth-talking is likely to dig him out of this hole. Either by misfortune or design, the president has managed to wind-up the Government of Morocco.

Ramaphosa vs Morocco: What’s the beef?

That’s because the ANC leader has taken a rather abrasive stance on a highly contentious issue. This week, Ramaphosa gave his unequivocal backing the independence of the Sahrawi Arab Democratic Republic (SADR) – otherwise known as Western Sahara.

The disputed territory is battling for self-determination, but officials in Morocco are adamant that this is THEIR land. The debate has raged on for almost half-a-century, and although the Moroccans have US support on the matter, Mzansi remains resolutely behind SADR.

Speaking during a state visit, Ramaphosa branded Morocco’s occupation of Western Sahara as ‘illegal’. He also suggested that the decolonisation of Africa ‘would remain incomplete’ until the Sahrawi people have been liberated. Strong words indeed.

“South Africa stands with the Sahrawi people in their struggle against illegal occupation. Until the people of Western Sahara are able to exercise their right to self-determination, the decolonisation of Africa will be incomplete.”

“This state visit should send a strong signal that South Africa will continue to strive for the self-determination of the Saharawi people and that South Africa’s position on Western Sahara remains unchanged and resolute.” | Cyril Ramaphosa

Alas, the backlash has been real for Mr. Ramaphosa. Yesterday, Moroccan Foreign Minister Nasser Bourita ripped into South Africa’s head of state, accusing him of being ‘on the wrong side of history’. For now, it seems a line has been drawn in the sand.

“The gesticulations and agitations of South Africa reflect its inability to act on the issue. The fact that a red rag or carpet has been laid out does not alter the situation, but rather expresses the inability to influence it.”

“A solution based on international legitimacy, and which distinguishes a state from a militia, a flag from a rag, is what people expect from a credible country. Morocco will continue to defend its interests and use all the means at its disposal.” | Nasser Bourita