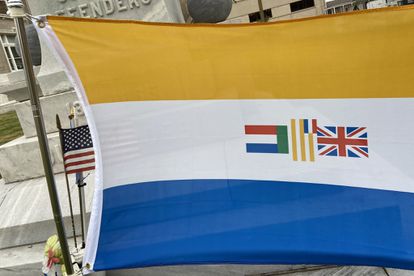 The apartheid flag was outlawed from display in 2019 – Photo: Twitter

The apartheid flag was outlawed from display in 2019 – Photo: Twitter

AfriForum is set to launch a controversial appeal in the Supreme Court next week, when they argue that displaying the old apartheid flag of South Africa DOES NOT constitute hate speech.

Why do AfriForum want to display the apartheid flag?

Brandishing the emblem in a public place was ruled to be a criminal offence three years ago. Although most South Africans accepted the decision, AfriForum has constantly framed it as an ‘attack on free speech’. Speaking recently, the lobby group outlined what their case would entail:

“This is a positive turn for freedom of speech. AfriForum is strongly in favour of freedom of speech, but also believes that true hate speech should be fought. In terms of the provisions of the Constitution, the fact that the old flag is offensive to some people is not sufficient reason to declare it hate speech.”

“We are concerned that it will have far-reaching consequences for free speech – one of the cornerstones of a democratic society – if displaying the 1928 flag is declared hate speech. We’ll therefore fight this in the highest courts.”

‘This could cause a riot’: Court appeal sparks major outcry

However, this move is not without its critics. A slew of political heavyweights have blasted the legal action, and Phumzile Van Damme has been leading the condemnation. The former shadow minister compared AfriForum’s stance to the display of a Nazi flag in modern-day Germany.

“Could you imagine Nazis fighting to fly the swastika flag in Germany freely? Nazi symbols are illegal due to their representation of the painful past. The Apartheid flag represents the same for many in SA. But hey, Afriforum believes Apartheid wasn’t a crime against humanity, so.”

Mzwanele Manyi, a long-serving official in the Zuma administration, says that this court case is taking South Africa ‘back to the dark ages’ – and he fears that the old apartheid flag has the potential to ignite ‘national unrest’.

“This is a load of NONSENSE that is taking us back to the dark ages. This move by AfriForum MUST be deemed extreme provocation, and it has the potential to ignite national unrest and racial polarisation. I suggest they abandon this and give South Africa a chance to heal.”

We’ve no choice but to unite against this madness https://t.co/4Bx2W7HqCl