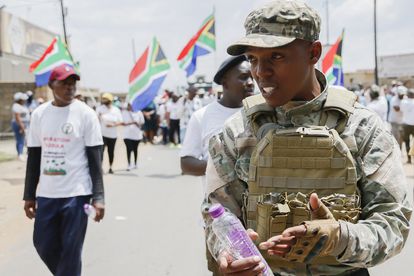 The controversial leader of Operation Dudula has responded to alleged parallels between himself and former US President Donald Trump – in fact, Nhlanhla Lux seems rather content with the comparisons.

Who is Nhlanhla Lux?

The Operation Dudula movement rose to prominence in 2022. Over the last six months or so, the group has led a number of marches that stoke-up anti-immigrant sentiment amongst disadvantaged South Africans. Nhlanhla Lux himself has been accused of exploiting the public.

However, Dudula officials are adamant that their only gripe is with ‘illegal foreigners’ – people who have entered South Africa illegally, and have no paperwork to prove they can remain in the country. Even so, their demonstrations have been known to turn violent on multiple occasions.

ALSO READ: Nhlanhla Lux ‘could be jailed for 90 days’ – if he ignores THESE court orders

With a soaring unemployment rate and rampant crime across the country, these undocumented migrants find themselves as the prime scapegoats for the organisation. Lux and his comrades have raided homes, shut down busy CBDs, and even clashed on the street with their staunch critics.

His abrasive, forthright views on immigration have led to him being put in the same boat as Donald Trump. The ex-POTUS was unflinching in his ‘America First’ policies, and it would appear that Nhlanhla Lux is more than happy to try and emulate the outspoken politician.

Nhlanhla Lux and Donald Trump: Two peas in a pod?

Kate Bartlett, a Foreign Policy journalist who has spent the last few months following Operation Dudula, posed the question to him in a recently-published article. According to Lux, a country putting its people first ‘is a no-brainer’ – which is why Trump has become a leader he ‘admires’:

“I don’t know if I liked [Donald Trump], but I liked his views, definitely. Putting Americans first in America and prioritizing Americans over illegal foreigners, man, that’s a no brainer—it’s what Dudula does.”