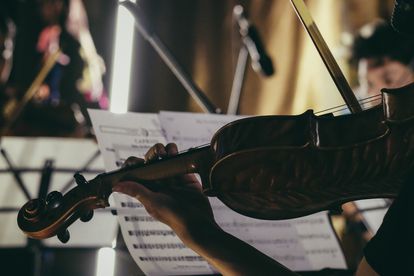 Nathi Mthethwa is something of a curious character: Just months after his proposals to erect a R22 million flagpole were shot down in flames, the Sports, Art and Culture Minister has returned with a plan to plough R30 million into a National Philharmonic Orchestra (NPO).

CEO of the Cape Town Philharmonic Orchestra (CPO), Louis Heyneman, says that the project will be an ‘unnecessary duplication’ – as there are already many training programmes in place to develop young musicians.

Indeed, Mthethwa’s desire to pump money into the arts at this stage will be criticised by many artists, who failed to receive support from his department during the crippling COVID-19 lockdowns. The DA have also labelled his plans for a new orchestra as ‘hare-brained’.

The proposals state that the orchestra, which would consist of 254 artists in total, will travel to Indonesia and Algeria as part of their first international engagements. Their first gig is meant to be in two weeks, with a performance slated for Johannesburg.

However, there has been no formal announcement about the NPO, and the tour planned for later this year comes with a multi-million rand bill. Veronica van Dyk – the Shadow Deputy Minister for Sports, Art and Culture – is furious with the department’s blueprint.

Should South Africa spend R30 million on an orchestra?

Referencing the laughable plans Mthethwa submitted for a R22 million flagpole recently, the DA representative has branded the orchestra project as ‘unnecessary and unaffordable. She also laid into the minister for allegedly ‘abandoning his responsibilities’ at the height of the pandemic:

“The DA utterly rejects the Minister of Sports, Arts and Culture, Nathi Mthethwa’s newest hare-brained scheme to establish a National Philharmonic Orchestra (NPO) to the tune of R30 million for the first year alone.”

“It seems the Minister has learned nothing from his R22 million flagpole and Afrikaanse Taalmuseum en-Monument debacles. We believe that this project, that has fallen out of thin air, is unnecessary and unaffordable.”

“It is simply astounding that the Minister would choose to spend R30 million on the yet to be established NPO while regional orchestras are struggling and are just getting back on their feet after two years of COVID lockdowns.”

After that R22 million flag of his got shitcanned???