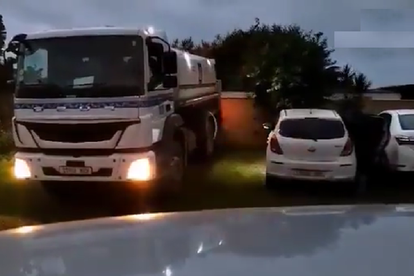 KZN Premier Sihle Zikalala has been eviscerated, in a statement issued by his local ratepayers association. According to the La Mercy-based group, the senior statesmen DID divert a water tanker to his own home – contradicting claims made by Zikalala over the Easter weekend.

Did Sihle Zikalala divert a water tanker to his own home?

When addressing the media on Saturday, the KZN Premier dismissed reports that he had sourced water exclusively for himself and his family, while thousands of other flood-hit residents scrambled for a fresh supply.

However, the La Mercy Civic and Ratepayers Association (LMCRA) issued a blistering rebuttal on Monday, revealing that witnesses who were nearby Zikalala’s home learned that the water tanker had actually been ordered to make an ‘exclusive delivery’ to the KZN Premier’s plush property.

A local mosque, just metres away from his house, was helping to supply water to locals who had suffered immensely as a result of the flooding. Some who queued up spoke to the truck driver, who helped spill the beans:

“In full view of all those present, the water tanker proceeded to the home of the KZN Premier. The driver offloaded the entire tanker for the exclusive use at his home. When queried, the driver said the tanker was destined for Tongaat, but got rerouted to Zikalala’s home. This took place whilst people lined up at a nearby mosque for water.”

“The incident was witnessed by several members of LMCRA, as well as several residents, security at the mosque and all those queuing at the mosque for water. The mosque and the Premier’s home are about five meters from each other, at a cul-de-sac. It was hard to miss the water tanker and residents were congregating to fill up their buckets.”

The accusations don’t stop there, either. More stunning revelations were shared by the group, who also called Sihle Zikalala and his wife out for using the situation as a ‘PR opportunity’.

In waving away the allegations just days ago, the KZN Premier spoke about how he and his wife helped to feed the community and those who have been struggling to find sustenance. This, however, has been called a ‘sham’ by the LMCRA, and they are still furious with the conduct of the ANC representative.

Explosive media statement from the La Mercy Civic & Ratepayers Association detailing how a water tanker did indeed unload a full tank of water at the KZN Premiers private residence, despite his denials. Disgraceful conduct when so many people need water at this time! pic.twitter.com/pD78b5tpMC