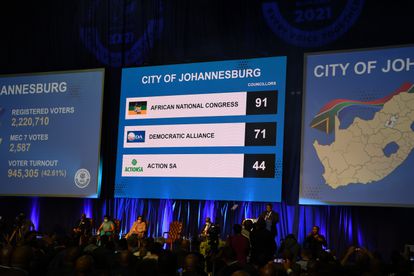 With just days left for hung councils across South Africa to form a functioning coalition, there appears to be some serious movement in Johannesburg. Earlier on Monday, it was revealed that a collective of political parties in the metro would meet to discuss the viability of creating a government together – in a move that would ‘freeze out’ the ANC and EFF.

Who will form a coalition in Johannesburg?

Herman Mashaba, the leader of ActionSA, revealed that he would be holding discussions with SIX other parties today, as the battle for control of Johannesburg moves into its final phase. The DA, with over 26% of the vote, has the largest vote share of any other party involved in these high-level discussions.

Alongside the aforementioned parties, the FF Plus, IFP, Patriotic Alliance, ACDP, and UDM have also been approached to strike a deal. Between them, they have enough votes to get past the 50% threshold and establish a metro government that can rule Johannesburg – free of influence from the ANC and EFF.

The seven-party coalition that could ‘freeze out’ ANC, EFF

Here’s how the numbers would add up in a seven-party coalition for Johannesburg:

The ANC claimed more than 33.6% of the vote in total, and although they gained the most council seats for one party (91), they don’t appear to have enough support to form a coalition. Even if they team up with the EFF – who wooed 10.6% of voting Joburgers to earn 29 council seats – they still fall short of the numbers required.

That’s why the meeting taking place on Monday signals one of the biggest developments in coalition talks since the votes were tallied two weeks ago. Should the seven party leaders finalise an agreement soon, the ANC and the EFF would be relegated to the status of ‘opposition’, in a city they’ve both had a stake in since the 2016 Elections.