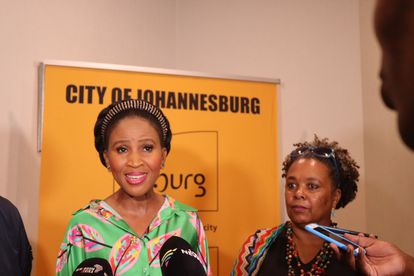 Mpho Phalatse returns as Johannesburg’s Mayor, less than four weeks after being ousted by the council – Photo: Twitter / @mphophalatse1

Mpho Phalatse returns as Johannesburg’s Mayor, less than four weeks after being ousted by the council – Photo: Twitter / @mphophalatse1

The DA is hailing a ‘massive victory for the rule of law’ on Tuesday, after the recently-ousted Joburg Mayor was given the green-light to return to office. The courts have ruled that Dr. Mpho Phalatse is the rightful figurehead for the metro, following a bitter council battle.

Who is the Joburg Mayor now? DA leader set for triumphant return

Last month, Mpho Phalatse was turfed-out from her role as Mayor following a contentious council meeting. However, the DA had fiercely contested that the vote of no confidence was conducted illegally. The Johannesburg High Court now comprehensively agrees with the party.

What the future holds for the council is unclear, however. The governing coalition is besieged by in-fighting, and the ANC/EFF alliance is likely to pose more challenges for the DA and its mayoral selection down the line. Nonetheless, the Blues are overjoyed with the result.

“DA wins its court case against the ANC’s illegal takeover in Johannesburg. The High Court has declared the removal of Mayor Mpho Phalatse unlawful. This is a victory for the Rule of Law. As she did for the last 10 months, Dr Mpho will continue to focus on delivery.” | DA statement

Mpho Phalatse ‘back in charge’, less than a month after ousting

Party leader John Steenhuisen is also beaming this morning. However, he also maintained a pragmatic outlook. The experienced campaigner has compelled all coalition partners in Joburg to get behind the mayor, in the name of ‘tackling ANC corruption‘.

“This is a massive victory for democracy. We have always maintained that the ANC’s power grab was unlawful. Now is the time for parties committed to service delivery and good governance to unite behind Mayor Mpho Phalatse and stop the corrupt ANC.” | John Steenhuisen