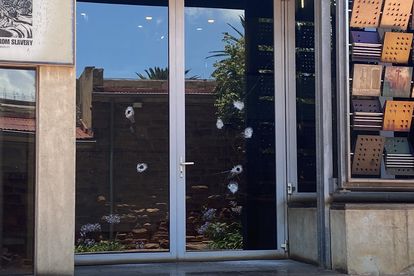 The damage caused by the hammer-wielding suspect at ConCourt – Photo: Neo Jama / Twitter

The damage caused by the hammer-wielding suspect at ConCourt – Photo: Neo Jama / Twitter

South Africa is starting a new year in ominous fashion once more – and on this occasion, we can’t blame it on COVID-19. Just days after Parliament was torched in Cape Town, a solitary suspect launched a violent attack on ConCourt in Johannesburg.

ConCourt attack: Who is the suspect?

Police were called to Constitution Hill earlier on Wednesday, and the suspect was arrested at the scene. However, the highest court in the land has been left battered and bruised, after extensive damage was caused by the alleged vandal. Details remain scarce, but here’s what we know about him:

Police have arrested a 36-year old suspect for breaking the windows using a hammer, at the Constitutional Court buildings in Braamfontein.
He has been charged with Malicious Damage to Property.#constitutionalcourt#ConstitutionalCourt pic.twitter.com/aps9u3x5g7

This incident has upset a number of politicians, including DA shadow minister Dean Macpherson. He believes that the wanton destruction of national key points in Mzansi has actually been encouraged by the government’s response to the July Riots.

Macpherson says that ‘there are clearly no consequences’ for those trying to destabilise the country:

“Just in the last six months, we’ve have the July unrest, Parliament burns down, and then the Constitutional Court gets attacked today. Where is crime intelligence and state security? We are being led by morons…”

“The failure to arrest the 12 people Ramaphosa told us caused the July riots has signalled to those who wish to destabilise SA that there will be no consequences for their actions.”