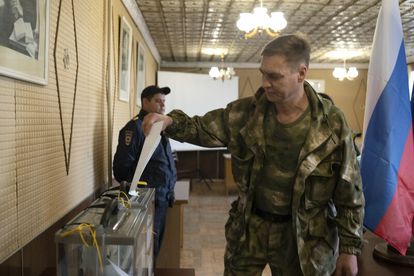 THREE members of the ANC Youth League (ANCYL) find themselves in the middle of a major diplomatic situation. The representatives have been given permission by the Russian government to observe the ‘sham referendums‘ taking place across several disputed territories in Ukraine.

Which ANCYL members are observing the ‘sham referendums’?

Donbass, which Russia is trying to annex from Ukraine, is one of the regions that was forced into a quickfire referendum on its future this week. Under duress from heavily armed soldiers, locals were coerced into voting in favour of Russian interests.

However, the Kremlin has been able to source a few willing observers from overseas, who are happy to keep up the pretence that these elections are ‘free and fair’. The delegation includes three South Africans, who form part of the ANCYL. The names of the troublesome trio are…

The ANCYL’s position somewhat spits in the face of the country’s official stance on Russia – which has already drawn international criticism. Far from remaining neutral in this conflict, the Youth League officials have made a decision to clearly and blatantly side with Vladimir Putin.

In several interviews, the members have spoke about the regions’ rights to self-determination, while also condemning imperialism in the West. This, it seems, was done without any sense of irony. Indeed, these contradictory viewpoints have been chastised by the DA.

Darren Bergman is the Shadow Minister for DIRCO. He has now asked Ukrainian officials to declare Skhosana, Mondlane, and Blennies as ‘undesirable persons’. This would allow the authorities to remove them from territory, which is still considered to belong to Ukraine.

“The DA has written to Ukraine’s Minister of Internal Affairs, Denys Anatoliiovych Monastyrsky, advising that it considers having ANCYL members who participated in Russia’s sham referendums in the Donbass region declared as undesirable persons.”

“Minister Monastyrsky will use his discretion to prescribe the time period within which Khulekani Mondli Skhosana, Stella Mondlane, Venus Lorato Blennies and other ANCYL members who entered the Donbass region unlawfully, will be barred from entering Ukraine territory.”

“The basis of the DA’s call is that these ANCYL members entered Ukraine territory unlawfully. By doing so, they violated Ukraine’s immigration laws. South Africa will not take the fall for the recklessness of the ANC. It is time they faced the consequences of their actions.” | Darren Bergman