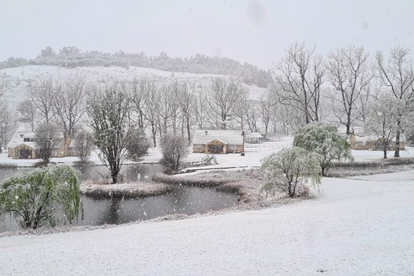 Snow fell in the Southern Drakensberg, Lesotho and parts of the Eastern Cape on Tuesday leading to a flurry of photographs of the latest snowfall being shared on social media.

SA Weather Services Forecaster Lehlohonolo Thobela told the South African that the snow had started falling earlier on Tuesday but it was expected to be short-lived and to clear up overnight.  He said snow had fallen in the Southern Drakensberg, parts of the Eastern Cape and in the Lesotho highlands.

“It should be done by tomorrow and overnight it should come back to normal conditions,” Thobela said.

The Southern Drakensberg tourist information facebook page shared several photographs and video of the snow on their Facebook page. Photographs of the snowfall at Lake Naverone, Castleburn, Silver Streams Self-Catering Accommodation and Caravan Park, Gooderson Drakensberg Gardens Golf and Spa Resort and Sani Pass via www.sanipasstours.com revealed a thick blanket of snow in the mountainous regions of KwaZulu-Natal.

Here are some of the photographs that were shared:

Watch a video of snow falling at the Gooderson Drakensberg Gardens Golf and Spa Resort here:

Unfortunately for snow seekers, Thobela said that not only would the snow fall be short lived, but temperatures were expected to rise from Wednesday, rapidly diminishing any hope of more snow in the next few days. However, he said a yellow alert weather warning remained as there was still a possibility of destructive rain with localised flooding overnight in some areas. These areas included parts of Lesotho, KwaZulu-Natal and the Eastern part of the Eastern Cape which could expect a 50 to 80 percent chance  of showers and thunder showers overnight.

“Everything clears up from tomorrow but there will still be a 60% chance of thunder showers in the North Eastern parts of KZN and the Southern parts of Mpumalanga,” he said.

City minimum and maximum temperatures for Wednesday were as follows: