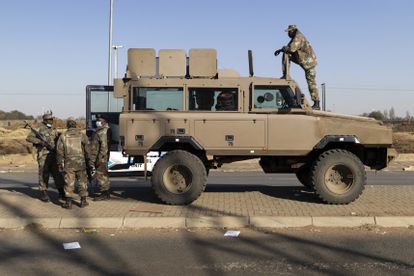 Well, there’s not a great deal we can add to this, really. Defence Minister Nosiviwe Mapisa-Nqakula has said what we were all thinking, after she gave an honest assessment of how riots across South Africa spiralled out of control.

Dozens have died, hundreds have been arrested, and tens of thousands of businesses have been ‘severely affected’ after an explosion of civil unrest spread from KwaZulu-Nata to Gauteng this week. The army was deployed to riot hot-spots on Tuesday, but as we’ve seen over the past 24 hours, there’s a need for reinforcements.

Not only has Mapisa-Nqakula confirmed that another 25 000 troops will be sent to the streets – but the SANDF reserve is now getting a call-up, too. For the first time in 27 years, every single standby member will have to report for duty.

‘Caught with our pants down’ – Defence Minister

On Wednesday evening, Mapisa-Nqakula also made a frank admission. She openly admitted that SANDF had initially ‘been caught with their pants down’, after failing to safely secure several looted malls. Her words…

“We agreed that okay, we don’t have to say 75 000 troops, but we should also not keep at the 10 000 which the President had proposed, that we should rather find a middle way – you also don’t want to mobilise for the sake of mobilising, because our mobilisation must also be informed by the continuous assessment of the situation on the ground.”

“Our soldiers were not at the malls. Our agreement was that we do guard duty so that we can release the police to enforce the law and deal with people who were carrying out acts of criminality. That’s the only reason we were not at the malls. the protests have been an eye-opener, and we were caught with our pants down.”

Defence Minister Nosiviwe Mapisa-Nqakula says the protests have been an eye opener, learning curve and they were caught with their pants down.

She says they undermine the state, are counter revolutionary and the state must stamp its authority.#sabcnews