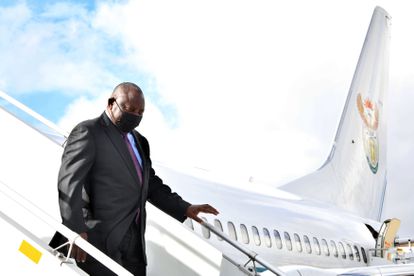 Here’s a little tip for you, Cyril Ramaphosa: When your country is facing a crippling round of load shedding, on par with the worst blackouts we’ve ever experienced in South Africa, it’s perhaps best to avoid sharing videos of your jet-setting weekend online.

Drinks and canapés for Cyril, no electricity for us

In what appears to be a wildly tone-deaf post, The Presidency shared a clip of Cyril Ramaphosa disembarking from a plane on Sunday, and being greeted by dignitaries in the UK. The ANC leader has gone ahead with his trip to London, in order to attend the funeral of Queen Elizabeth II.

That decision, however, has been widely panned. Stage 6 power cuts were announced on Sunday morning, with the threat of HIGHER load shedding stages also lingering. We are on the brink of an unprecedented blackout schedule, with Eskom failing to secure the grid.

It is a crisis of the highest order. One that requires steadfast leadership and active management. Right now, Mzansi is getting very little of that from its elected head of state. Ramaphosa will pay his respects to The Queen tomorrow, but not before he is hosted at an event by King Charles III.

This evening, President Ramaphosa will be part of a huge delegation of foreign leaders inside Buckingham Palace. Only the most exclusive luxuries will be offered to the esteemed guests, in what promises to be a glitzy and opulent reception.

Meanwhile, we’re all being told to avoid putting our heaters on and cut down on energy usage. Funny old world…

His Excellency President @CyrilRamaphosa at the London Stansted Airport in the United Kingdom where he is on a special visit to attend the State Funeral of Her Majesty Queen Elizabeth III taking place on Monday, 19 September 2022. pic.twitter.com/o6DhwbTKf3

Social media users have called Ramaphosa everything from ‘a clown’ to ‘a disgrace’ after watching him land in London. The DA aren’t giving him a free ride either, and Shadow Minister Kevin Mileham has demanded that the president returns home immediately to ‘prevent a total grid collapse’.

“The DA calls for the immediate return of Cyril Ramaphosa to South Africa. We are now one load shedding stage away from a total grid collapse. Over the past few weeks, Ramaphosa has ignored several DA warnings that his Energy Response Plan had veered off-track.”

“With Eskom announcing Stage 6 load shedding due to a system-wide failure of generation units across its generation fleet on Sunday, Ramaphosa is now duty bound to heed the DA call and declare a ring-fenced State of Disaster around Eskom.” | Kevin Mileham