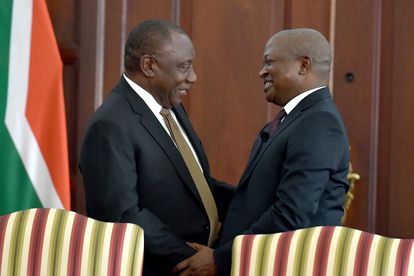 We’re just days away from our next national address on our current lockdown restrictions. These so-called ‘family meetings’ are usually deployed to announce big changes to our pandemic laws. However, a different variable is at play this time – as Cyril Ramaphosa may have to hand hosting duties over to David Mabuza.

Will David Mabuza lead the next family meeting?

The president has been laid low this week after testing positive for COVID-19. Thankfully, his symptoms remain mild, and he’s thanked the vaccines for keeping him out of serious trouble. As Deputy President, DD Mabuza has been delegated ‘all presidential duties’ for the next few days – and that may also include leading the family meeting.

It would be a rather surreal experience not to have Ramaphosa address the nation, almost two years after these televised briefings became standard practice. However, Health Minister Joe Phaahla says no decision has been taken yet.

What to expect from South Africa’s upcoming family meeting

When the family meeting does get underway, Phaahla has hinted that there may be ‘restrictions to announce’, but not many. The NCCC meeting, where a plan of action will be devised, is being led by Mabuza today – and the conclusions will be presented to citizens, possibly by Wednesday or Thursday evening.

However, we’re still none the wiser about who will be addressing their fellow South Africans…

“The NCCC will meet later today and only then will there be a decision on restrictions, if any. Deputy President David Mabuza will chair the NCCC meeting. The decision [on who will deliver an address] will be made this evening.”

While getting his J&J booster shot on Tuesday, Phaahla spoke at length about the current Omicron wave racing across South Africa. On a day of positive developments, the minister mused about the situation at length:

It’s unclear if Mabuza will deliver the subsequent #FamilyMeeting – this is another decision to be taken this evening.