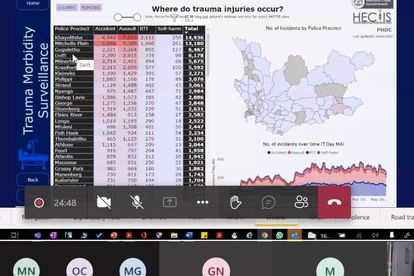 The Western Cape Government launched a safety dashboard on Thursday, 26 May, after Cape Town was rocked by a spate of shootings last week. The dashboard is meant to ensure a data-led and evidence-based allocation of law enforcement resources.

Premier Alan Winde said the launch of the first-of-a-kind safety dashboard is necessitated by a concerning increase in violent and gun-related crime in the Western Cape.

The latest incidents occurred in Cape Town in Khayelitsha and Manenberg.

On Sunday night, 22 May, three family members were shot and killed in Ekuphumleni, Khayelitsha. It is alleged that two armed men in dark clothes stormed the home in Lindelwa Street and fired several shots.

Alfred, Samuel and Jacoba Titus were declared dead at the scene. The siblings were all aged in their fifties.

Hours later, six people were shot and wounded at approximately 6:15 on Monday when a gunman opened fire on them in Duinefontein Road, Manenberg.

Two women – aged 50 and 52 – and four men aged between 35 and 58 were wounded and transported to a hospital for treatment.

No arrests have been made in connection with either shooting.

The dashboard has been active since the end of March 2022 and is already being used to guide the province’s deployment of its resources. Allen said there are 1057 Law Enforcement Advance Plan (LEAP) officers currently deployed.

Winde said “We need real-time data to not only guide our deployments based on past incidents but also to anticipate where new hotspots may appear so that we can deploy the necessary resources – before lives are lost.

“While the release of the quarterly crime statistics helps to paint a picture of trends in criminal activity, it does not share real-time information, which is precisely what the Safety Dashboard sets out to do.”

Dr Melvin Moodley, the Western Cape Director of Health Intelligence, gave a demonstration of the platform, which is based on the same technology used for the provincial government’s COVID-19 dashboard.

The dashboard is supplied with data via an information system referred to as a data warehouse that contains layers of information.

One of the layers is HECTIS (Hospital and Emergency Centre Triage and Information System), which was developed in-house by the provincial health department.

When a clinician sees a patient, they enter the patient’s information into the system and it is fed into the data warehouse and eventually the dashboard.

There are plans to add additional “layers” to the data warehouse – maternity data is already available and soon Emergency Medical Services (EMS) information will be too.

“Instead of just one data source, we’ve got multiple,” said Moodley. “We integrate the data to get a better understanding.”

So far, 34 facilities in the Western Cape are using the HECTIS system and the province plans to roll it out everywhere so that it has a better understanding of the full picture of interpersonal violence.

Patients’ addresses are geocoded to their policing areas, which gives the authorities an idea of where the different kinds of injuries occur.

The dashboard also allows users to drill down and look at the data from a particular area. Perhaps it comes as no surprise that most injuries occur over the weekends.

“The value of a dashboard is that it is so much faster than research. Research is very robust and very valuable but this dashboard can give us information quickly so that we can act quickly rather than wait for information,” said the Director of Health Intelligence

According to the safety dashboard, Moodley showed that the most significant chunk of cases reported in hospitals – 43.8% – are from assault.

Moodley said one of the main implications of this is that the health system is burdened by a “reversible” and preventable mechanism.

“If we can prevent the assaults, it puts our health system under much less pressure,” he said. The dashboard also showed that most assault injuries – more than 40 percent – were due to sharp objects followed by blunt objects and firearms with around 7 percent.

According to the data, most assaults in the Western Cape happen in Khayelitsha, Mitchells Plain, Gugulethu and Delft, which are all high priority areas for the provincial safety plan.

“If we understand who is being assaulted we might have a way of preventing assault in that cohort.”

• When and where injuries occur;

• The mechanism of injury and the pattern of injury presentation over time;

• Patterns of trauma in particular populations such as gender or age groups over time;

• Patterns of trauma among pregnant women presenting at emergency centres; and

The dashboard also provides data for the life cycle of an individual – even prior to birth.

Moodley said there is a higher proportion of assault on women in the second trimester of pregnancy. He added that the government would have to do more research before saying why this is the case.

However, he offered that the second trimester is when most women start displaying their pregnancy and start talking to their partners.

From birth to two-years-old children mainly sustain injuries through accidents with some assault, as the child grows older, road traffic incidents and assault become more prevalent.

But, when the child reaches adolescence – 11 to 18 years old – there is a massive jump in assault, which makes up 37.5 percent of injuries for that age group.

“This picture that is being painted is that a child is born into violence when pregnant women are assaulted and as they grow older they grow into violence.

“There is this sad cycle that is manifesting in many lives in the Western Cape,” said Moodley.

In response to a question from The South African, Moodley said the safety dashboard is not yet available to the public but that will change in due course.

Currently, it is available to Western Cape safety stakeholders including the SAPS, the Department of Police Oversight and Community Safety and the City of Cape Town.

The dashboard is updated daily, according to Moodley but the data-capturing happens in real-time at trauma centres across the province.