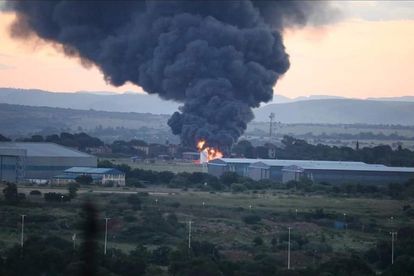 Concerns have been raised about yet another fire at a strategic location in Mzansi, after black smoke was seen billowing from the Waterkloof airbase in Pretoria. It’s not yet known how the blaze was started.

SANDF have stated that the fire HAS been brought under control, for the time being.

However, locals in the area noticed that large flames were visible at the premises. A litany of photos have been posted on social media, showing the extent of the fire – and it appears we’ve got another serious issue on our hands.

In a month which has seen fires at several government buildings – including the inferno which claimed Parliament – this latest news from Waterkloof is likely to leave Mzansi on edge. Details remain sketchy at this point.

Fire at Waterkloof Airforce base. Seems to be a fire at the fuel tanks. @crimeairnetwork @Abramjee @crimewatch202 @CrimeStop_RSA pic.twitter.com/8V4HpTKSlb

Is another significant location under attack?

The fire was reported just after 19:30 on Sunday evening. This is a developing story, and we’ll have more on this as we receive it. The latest posts online reveal just how bad this blaze looks, even from miles away:

[Breaking News] It is alleged that Waterkloof airport is on fire right now.@LivePretoria #Waterkloof #fire pic.twitter.com/oRKG172fgn

Reports of a fire at the Waterkloof Airbase in Pretoria. pic.twitter.com/0BOgFSEVWI

Updates on the Waterkloof airbase fire

Waterkloof is the same airbase the Guptas once flew into, in order to attend a family wedding nearby. The move was symbolic of the ‘state capture era’, defining just how much control the billionaires had over SA’s national authorities.

As the recriminations into this latest fire continue, many will question if this fresh catastrophe at the airbase is part of a coordinated plot. So far, law enforcement officials have been unable to link attacks on Parliament, the Department of Justice, and ConCourt to each other. Alas, suspicion have been raised…