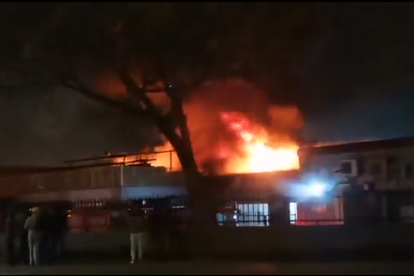 Locals in Soweto, Joburg have uploaded footage of a fire that ripped through the Protea Gardens Mall on Wednesday. A full emergency response was co-ordinated by fire, police, and other services. Although no injuries have been noted, at least two stores have been damaged.

Joburg mall ravaged by fire – as police look for a cause

The first flames were reported just after 19:00 on the evening of 24 August. Police have already launched a probe into the cause of the blaze, and so far, there is nothing linking this incident to the National Shutdown, or any other form of unrest.

The mall is very much a hub of the community in this part of Soweto. The Midway shopping centre has been a real hit with the locals – and many of them rushed to the scene when they noticed what was happening. Police and fire teams managed to successfully cordon off the area.

Two fire engines were summoned to extinguish the blaze, which raged long into Wednesday night. Nana Radebe Kgiba is a spokesperson for the Johannesburg Emergency Services. The official was able to confirm some very basic details for us…

“We can confirm that two shops caught fire at the Protea Gardens Mall. At this stage, there are no injuries reported. We’ve got two fire engines on site and the cause of the fire is still under investigation.” | Nana Radebe Kgiba

As documented by a series of videos shared online, smoke was seen billowing from the roofs of the affected establishments within Protea Gardens Mall. Bright, ferocious flames illuminated the night sky, before they were eventually quelled. You can see more clips of the fire here:

Part of Protea Gardens Mall, in Soweto, Midway is on fire. Authorities are on scene. pic.twitter.com/d5GQdWbbGS