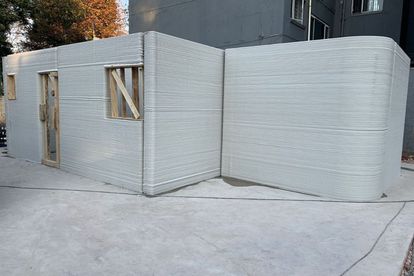 UJ says a six-bedroom house can be printed in one day with its 3D printer. Photo: Twitter / @txm1971

UJ says a six-bedroom house can be printed in one day with its 3D printer. Photo: Twitter / @txm1971

The University of Johannesburg (UJ) and the Department of Science and Innovation (DSI) are collaborating on a programme that demonstrates how 3D printing could transform and revolutionise housing in South Africa.

On Monday, UJ Vice-Chancellor Professor Tshilidzi Marwala said on Twitter that the university would build a six-room RDP house in one day using a 3D printer.

Later on the same day, he added, “This 3D printer at the University of Johannesburg is fast. If we invest in this technology… we can provide our people with decent housing fast and end informality.”

UJ said one of the advantages of 3D printing houses is that it is quicker than traditional brick and mortar construction.

However, two perceived disadvantages of 3D printing houses are that it reduces local employment labour – both in number and time – and reduces contribution to the local economy as there is less local material purchasing and local labour employment.

The study found that – depending on the 3D printing system used and the thickness of the wall – an entire house could be printed in a minimum of five hours at a minimum layout speed of 300mm per second.