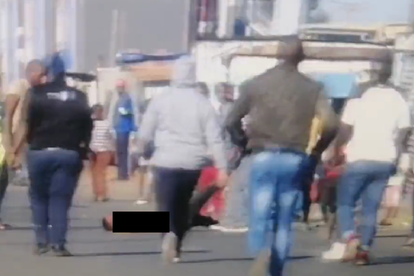 The aftermath of the disturbing incident was posted online by a camera crew operative – Photo: SABC / Twitter

The aftermath of the disturbing incident was posted online by a camera crew operative – Photo: SABC / Twitter

There aren’t any words that can aptly describe the sheer horror witnessed by SABC journalists and the camera operators on Monday afternoon. While reporting on the Soweto tavern shooting, two members of the news network inadvertently captured part of a brutal stabbing incident.

Violence in this part of Soweto is nothing new, but the way this stabbing was committed so brazenly has even left hardened locals stunned. Ofentse Setimo was the reporter on the scene, and he has described in detail how this casual act of severe criminality played out:

Setimo was accompanied by cameraman Herbert Memela. The pair were stunned when, just as they prepared to interview a witness at the Soweto tavern shooting, a man drove a knife into his victim’s body – with blood allegedly spurting onto the crew’s tripods.

The man collapsed to the floor, before others continued to beat and kick him. The hapless victim was then dragged out of the road, and his fate remains unclear. According to the senior journo, other camera crews witnessed this shocking act.

“We were setting up to interview a witness, when two men asked if she wanted to go through with it – almost joking with her. Out of nowhere, someone came and stabbed one of those men with a knife. At first, we thought he was greeting him. Then we saw blood on his palm.”

“That blood even splattered onto one of our tripods. We then moved away from the scene, and the community attempted to separate the two males. It is indicative of the crime in Nomzamo right now. We weren’t the only camera crew who captured this, either.”

A man stabbed and dragged infront of the SABC cameras in Soweto. Crime is rife at Nomzamo settlement. This happened few meters away from Mdlalose’s Tavern. The Police Minister Bheki Cele has promises to deploy more police in the area. pic.twitter.com/gzhgh1X7nM