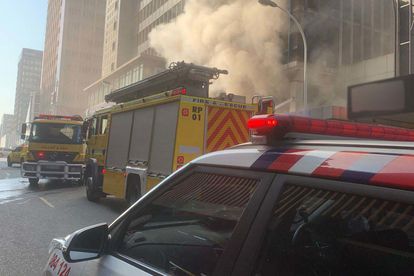 Paramedics treated six children for smoke inhalation on Tuesday when a fire started in the building that houses their creche in the CBD of Durban.

THE FIRE STARTED ON TUESDAY

According to ER24 ambulance service fifteen other adults, who were in the building, were also treated on the scene.

Paramedics were called out to a building on fire on the corners of Joe Slovo and Anton Lembede street in Durban CBD on Tuesday afternoon.

“When paramedics arrived at the scene at approximately 14h30, they found smoke billowing from a multi-story building.

“It is also understood that a creche was located on one of the floors.”

The Fire Dept and Metro Police Search and Rescue managed to contain the fire.

“They brought all the patients safely out of the building. Once outside, paramedics immediately assessed fifteen adults and six children for any injuries.

“Fortunately, no serious injuries were found and the patients were treated mostly for smoke inhalation.”

ER24 said only two adults were transported to a hospital for further medical care.

“The rest declined to be transported to a hospital.

The exact circumstances surrounding the building fire are not known to our paramedics. Local authorities were on the scene.”