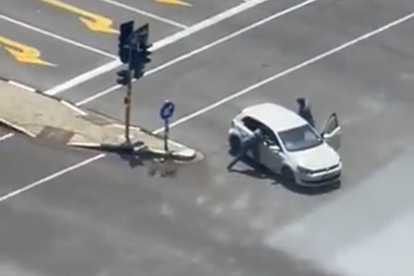 Screenshot of the clip which shows the brazen murder in Sandton – Photo: Yusuf Abramjee

Screenshot of the clip which shows the brazen murder in Sandton – Photo: Yusuf Abramjee

A chaotic and harrowing scene has played out in one of the most upmarket districts in Gauteng, after two armed thugs mercilessly opened fire on a car passenger at the intersection of Catherine and 5th. It has since been reported that the victim, who was rushed to the nearest hospital in Sandton, has passed away.

The video footage, taken by frightened office staff in the Sandton CBD, shows the criminal pair approach the vehicle, and a scuffle ensues. It’s not immediately clear what exactly took place, but it certainly didn’t look good.

The suspects then speed away in a vehicle with no plates, before any first responders can get to the scene. Those filming the incident also suggest that the victim was dead, after witnessing him ‘fall from the passenger side door’.

Police are advising locals to avoid the crime scene, which is now being processed. The video was shared online by anti-crime advocate Yusuf Abramjee. He also confirmed that the shooting was a fatal one:

The motivations for this murder still remain unclear. But Michael McLaggan, a South African crime analyst and researcher, believes this may have been an assassination attempt.

There are unverified reports reaching us from Sandton that the victim was actually a police officer, but we’re still awaiting confirmation from SAPS on that matter as well.

A shooting occurred in central Sandton minutes ago. The MO indicates assassination. Police currently on the scene. pic.twitter.com/KbcHYtSJiK