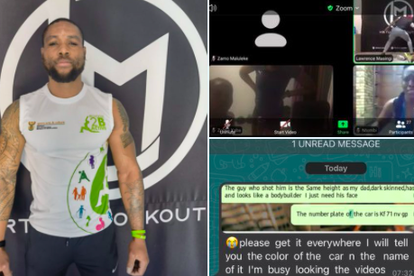 An armed robber shot and killed popular Gauteng personal trainer, Lawrence Masinge, in a hail of bullets in full view of more than 200 people who were in an online Zoom video call training session with him on Wednesday night.

A member of the online exercise class, who witnessed the murder, spoke to The South African on condition of anonymity because she fears for her safety. She said the class had logged in at around 6.30pm for a workout with Masinge but just 36 minutes into the class, she heard the ‘loud bang’ of the first gun shot.

“At around 19:10, I was working out obviously and when you are working out on zoom you’re not looking at the computer. I heard a loud banging sound and ran to see what is happening and that’s when my husband ran to the screen and said this guy is getting shot,” she said,

“We were watching a guy shooting him multiple times and then he ran back and shot him in the head again three times. It’s like he wanted to make sure he was dead. By that time everyone was unmuted and asking what is going on..the music was still playing in the background,” she said.

She said his online clients were trying to find out where Masinge lived to send for help when a woman appeared on the Zoom call screen and called for help on a phone.

“Forty minutes later he was still just lying there cold and the police arrived with the paramedics. They asked us questions and if anyone had any kind of footage,” she said.

A spokesperson for the Gauteng SAPS had not responded to questions at the time of publication.

His family, still in shock after the murder, which took place at around 19:10 on Wednesday, were not immediately available speak to the media on Thursday morning.

However, Masinge’s fitness clients and social media followers, some who were present in the training session and witnessed the cold blooded murder, took to Facebook and Twitter to express their shock and share their condolences with his family. They are also determined to find and use any video recordings of the attack to bring his killers to book.

the Don @Hottiie_Spaiinn Tweeted about the murder of Masinge: “ Last night Lawrence Masinge was shot while on a zoom meeting in the head and the suspects continued to rob the place but the number plate was seen on cameras. Please retweet and help raise awareness about this matter.”

Several people Tweeted that they believed the shooting was a hit.

meneer @RichMODE4 Tweeted: “This was a straight hit. Robbery was just a cover.”