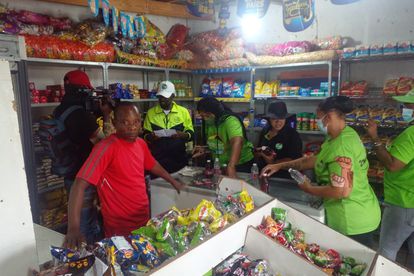 Gayton McKenzie, leader of the Patriotic Alliance, has spent his weekend ambushing shops owned by alleged ‘illegal foreigners’ – with him and his supporters going on a crusade against expired food items.

Who are the Patriotic Alliance?

The young party, which caused controversy due tp its power-sharing agreement with the ANC at the 2021 Local Elections, prides itself on ‘putting South Africans first’, and the PA are known for their hardline stance on immigration.

They are staunchly opposed to the presence of illegal migrants – and especially those who own businesses in major townships. A foreign-owned spaza shop in Eldorado Park (South Johannesburg) felt their wrath on Friday…

McKenzie, and a few others dressed in green garments, raided the shelves and searched for out-of-date produce. The group were then seen taking the items out of the shop, dumping them in a nearby skip.

All Patriotic Alliance forces throughout the country are visiting all shops owned by illegal foreigners, our loyalties are with newborn babies that must eat this rubbish filled with worms We didn’t just talk abt this for votes, we are fully #PutSouthAficansFirst pic.twitter.com/eLic4jjcGF

Our grandparents who are unable to read expiry dates on items are being sold this, the Patriotic Alliance will not rest until all illegal foreigners are back home. pic.twitter.com/SxEoY90s12

In a typically bullish mood, Gayton McKenzie took to Twitter and rallied his followers earlier today. He says foreign business owners ‘should only meet him at the border’, and left no room for compromise:

“Different organisations will meet on Saturday to discuss the way forward to rid our country of illegal foreigners, This will be done outside political affiliation, we are ready to take our country back, we are no longer tweeting only, we are hitting the streets. You should never fear illegal foreigners.”

“Somalian/Bangladeshi and Ethiopian leaders has requested to meet with the Patriotic Alliance leadership, we will only agree on one condition , the meeting should happen at the border gate because they will leave after that meeting. We are not this leaders that you bribe.”