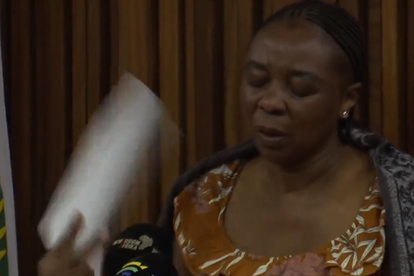 Every time Nomia Rosemary Ndlovu takes to the stand, something utterly bonkers occurs. So far during her trial, the woman accused of orchestrating the murders of FIVE relatives and her boyfriend has found different ways to shock observers, throughout the proceedings – and things didn’t change much on Monday.

After breaking down in tears earlier this morning, Rosemary Ndlovu returned to the court for the afternoon session. But as things started getting heated, the suspect completely shut herself down. She started gasping for air, fanning herself with court papers, and collapsing her head into her hands.

Her translator in the dock explained to the bench what was happening. He reported that his client was asking to be excused, because she wasn’t feeling very well. Ndlovu said she felt the room was ‘spinning’, and complained about the sudden onset of a high temperature. Court was eventually adjourned until Tuesday morning.

#rosemaryndlovu says she’s not feeling well and says she feels as if the room is spinning. The case is adjourned for Tuesday morning. pic.twitter.com/ZVs2V8CiBV

[WATCH] #RosemaryNdlovu tells the court that she can't proceed to testify because she is not feeling well.#Newzroom405 pic.twitter.com/S2iqiwgVP6

Ndlovu claimed she was ill at the end of last week. But that wasn’t before she threw food at journalists, flashed her backside to the gallery, and even joked about her newfound ‘fame’ with reporters. Those acts have earned her little sympathy, and some suspect that her histrionics were pure theatre:

This lady reminds me of myself back when I worked, when I was planning an illegal day off at work … my acting begins just immediately when I step in #rosemaryndlovu

When did Rosemary Ndlovu get the time to change her hairstyle? ???? she is so dramatic ???? she's acting sick