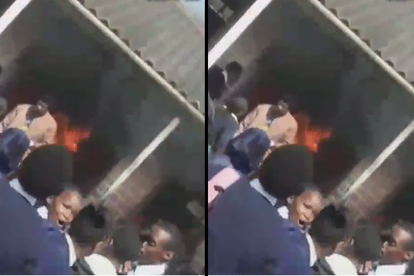 Children cheer and celebrate as their classrooms are set on fire at Ndengetho High School – Photo: Facebook

Children cheer and celebrate as their classrooms are set on fire at Ndengetho High School – Photo: Facebook

Pupils at a high school in West Durban were left seething at the back end of last week, after they had their phones confiscated during a ‘surprise inspection’. Hundreds of the devices were taken away in this part of KZN, sparking a fiery retaliation.

Learners were left enraged by the way the inspection was conducted. Local police offers were invited into the facility, in order to flush out any contraband drugs or weapons. Instead, the school ended up enforcing its ‘no phones allowed’ policy in a strict and rigid manner.

Despite the policy being written into Ndengetho High School’s Code of Conduct, staff have chosen to look the other way in recent years. Alas, confusion over the enforcement of these rules led to a very serious confrontation.

A group of miffed students made a plan to hit back during one of their break times. Several classrooms were set on fire, as doors and windows were also broken. The chaotic scenes were caught on camera, and uploaded to Facebook over the weekend.

Teens who attend the school have since commented on the video, and they remain adamant that ‘there was no reason’ to seize so many phones. In the clip, we can see small fires springing up in several rooms, as staff scramble to get everyone to safety.

Why were so many phones confiscated?

Menzi Busani, the school principal, explained his decision to confiscate more than 400 phones from the students. He reasoned that the decision was based on ‘security’, due to issues with Ndengetho’s capacity for safe storage. Pupils didn’t agree with his logic, however.

“Over 400 phones were confiscated. There was no way they’d fit into the school’s safe, and it would be unsafe to keep that many phones in the school premises. I informed the children that the police would be taking the phones and keeping them at the police station.” | Menzi Busani