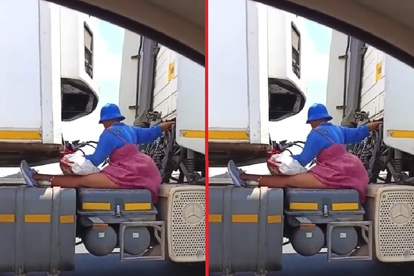 Is somebody missing a gogo? A video has gone viral on South African Twitter today, after this granny was spotted ‘cab-surfing’ on a truck carrying goods for Spar. The retailer is yet to respond to the widely-shared footage, which left many onlookers fearing for her safety.

In the 11-second clip uploaded online, an older woman – wearing a blue hat, blue top, and pink dress – was seen straddling the back of the cab which connects to the trailer. Her clothes billow in the wind, as the lorry reaches high speeds on a dual carriageway.

It’s unclear if the driver of the HGV knows that he’s carrying an extra passenger. But the dangers are obvious to all. Her legs are placed underneath the trailer. Even a minor incident could result in a severe mutilation. Her dress is also perilously close to the red-hot exhaust silencer.

What exactly happens from this point is unclear. Anti-crime advocate Yusuf Abramjee amplified the video on Thursday, after he shared it with hundreds of thousands of followers on his page. His ‘caption competition’ sparked a bit a of a backlash, mind.

‘This is life-threateningly reckless’

One of South Africa’s most popular political YouTubers, Big Daddy Liberty, also passed comment on the clip. He stated that the images were ‘depressing’, and said that he empathised with a woman who is clearly in a desperate situation.

“This is actually a depressing image…she cuts a lonely, desperate figure. What has gone wrong in your life for THIS to be your reality? I empathize with this lady, even if I also recognize that what she is doing is life-threateningly reckless. South Africa is a sad place.” | Big Daddy Liberty