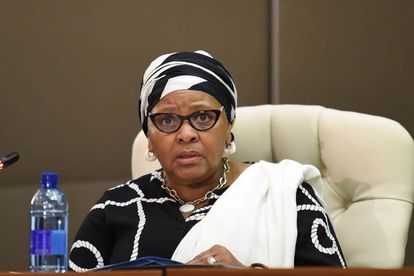 Well, this is a terrible look for President Ramaphosa, and the ANC government as a whole. After spending the last two days preaching ‘unity’ for a country supposedly divided by an insurrection, it seems that Cyril can’t even get his own Cabinet to sing from the same hymn sheet – as Defence Minister Nosiviwe Mapisa-Nqakula proved on Sunday.

The senior ANC politician has rejected the notion that South Africa had just defeated an ‘insurgency’, and Mapisa-Nqakula is convinced that the recent round of riots and looting were simply the work of ‘criminal counter-revolutionaries’.

“We are not seeing signs of a coup or insurgency, but rather a ‘counter-revolution creeping in, in the form of criminality and thuggery. This was designed to sow the seeds of division in the country.”

This change in terminology matters, because it contradicts what Cyril Ramaphosa told the nation on Friday night. The President was all too happy to celebrate the ‘failure’ of an insurrection, lamenting an attempt to ‘dislodge the government’.

“These actions are intended to cripple the economy, cause social instability and severely weaken – or even dislodge – the democratic state. Using the pretext of a political grievance, those behind these acts have sought to provoke a popular insurrection – but they have failed.”

“The ensuing chaos is used as a smokescreen to carry out economic sabotage through targeted attacks on trucks, factories, warehouses and other infrastructure necessary for the functioning of our economy and the provision of services to our people. If we stand together, no insurrection or violence in this country will succeed.” | Cyril Ramaphosa

Ramaphosa may be left red-faced over ‘insurrection rejection’

These developments follow a similar pattern to what we witnessed earlier this week. The State Security Agency declared that they ‘knew of a plan’ to disrupt South Africa in a major way – but the information they passed on to the police department was, apparently, never acted upon. The confusion at the heart of government is evident.

Mapisa-Nqakula finally made the decision to send thousands of troops to both KZN and Gauteng, days after violence erupted in both provinces. However, her opinions on why they were deployed differ wildly from those of the Commander-In-Chief, and Ramaphosa will have a real job on his hands when it comes to smoothing this one over.