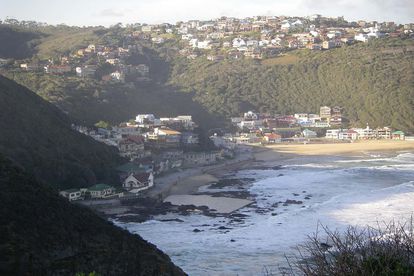 A view of Herold’s Bay, South Africa, from a lookout point south-west of the town – Image via Wikimedia Commons / JP Meijers

A view of Herold’s Bay, South Africa, from a lookout point south-west of the town – Image via Wikimedia Commons / JP Meijers

Police have confirmed that a vehicle plunged from the top of Voëlklip in the Western Cape this week, marking another heart-breaking incident at the cliff-face in Herold’s Bay. Wreckage was found at the scene on Tuesday. A missing person’s case has also been registered.

More heartache at Voëlklip: Another vehicle ‘plunges from cliff’

Details remain sketchy at this point. Due to stormy conditions, rescue teams were unable to carry out a full recovery mission on Wednesday. Crews will launch another attempt on Thursday, but hopes of finding the victim alive are fading fast in this part of the province.

The car itself has not yet been located. Even at low-tide, conditions have been declared as ‘too extreme’ to launch a rescue. Police remain tight-lipped about the situation, with one spokesperson ‘refusing to speculate’ about the circumstances behind this latest tragedy.

Not again? Fears of another victim at ‘accident black-spot’

Voëlklip can be found about 20km outside of George. To the naked eye, it’s a spot of incredible natural beauty, and it overlooks a stunning coastal town on the Garden Route. However, the cliff comes with a very dark and notorious past.

Over the years, Voëlklip has become something of an accident black-spot, due to the high number of deaths and fatal incidents linked to the site. Around a dozen people have met their end, as a result of falling or driving off the so-called ‘cliff of death’.

In fact, a number of these incidents have taken place in 2022 alone: