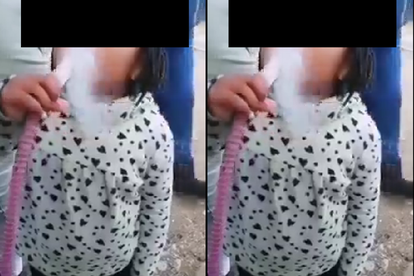 The toddler in the video was allowed to smoke, without any adult intervention – Photo: SAPS / Twitter

The toddler in the video was allowed to smoke, without any adult intervention – Photo: SAPS / Twitter

What fresh hell is this? The South African Police Service (SAPS) has reacted to a viral video doing the rounds online, which depicts a smoking toddler taking drags from a pipe – in full view of THE adults around her.

The shock footage has sparked a major backlash on social media, and there are now demands to find the parents who are responsible for this child. In the clip, the youngster is allowed to puff on the pipe as if she were a senior smoker, and no intervention is forthcoming.

At one point, the smoking toddler appears to sneeze after inhaling the smoke, before taking another drag. Some adults were heard encouraging the child before the end of the video. Meanwhile, many viewers have been left to fear the damage this could be doing to her vulnerable lungs.

Although we won’t be sharing the clip in this article, it has been posted far and wide over the last 48 hours – prompting SAPS to intervene. Law enforcement officials have reacted angrily, flagging the scenes as outright child abuse. However, the police also have a plea for the general public.

‘Do not share this video’ – SAPS issue warning to public

They are asking anyone who comes across the footage to avoid sharing it on their feeds, or in private. Those who have uploaded the video themselves have also been told to remove it immediately, given that it impairs the dignity of the unwitting toddler.

Although the haunting incident is receiving hoards of attention this week, it was actually reported to SAPS’ Family Violence, Child Protection, and Sexual Offences Unit back in November 2021 – over seven months ago.

“This is a video the SAPS were made aware of in November 2021. The incident was escalated to the Family Violence, Child Protection, and Sexual Offences Unit. Please remove this video and stop sharing it as it is depicting child abuse.”