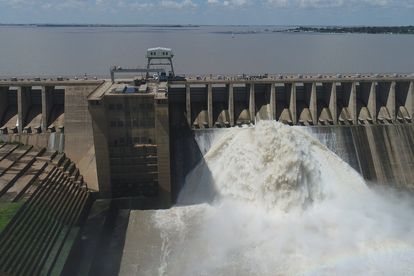 The Vaal Dam, which supplies Gauteng with most of its water, is thought to be roughly 10% OVER CAPACITY on Tuesday – prompting a flood warning from the Water and Sanitation Department.

Yesterday, two more sluice gates were opened at the facility, as the increased over flows of water pushed the Vaal Dam to its limits. Communities living nearby have been struggling to prevent flooding on their properties:

Department spokesperson Sputnik Ratau has since issued a warning to those who are based downstream from the Vaal Dam, as isolated incidents of flooding are expected to take place in the coming days.

“The Department and Water and Sanitation on Monday opened two sluice gates at the Vaal Dam due to increased inflows from feeding catchments. The dam – which supplies most of Gauteng – stood at 108.5% on Monday morning. Meanwhile, the Bloemhof Dam was at 109.0% full and the dam level increased over the past 24 hours.”

“Farmers are asked to remove equipment that may be damaged due to the outflow. This is also a warning for communities to ensure that children are not swimming near the stream. The department will continue to monitor the volumes, but the sluice gates will remain open until further notice.”

The flood alert is now being shared across various platforms online, as both National and Gauteng-based water officials continue to do whatever they can to help manage these huge overflows.