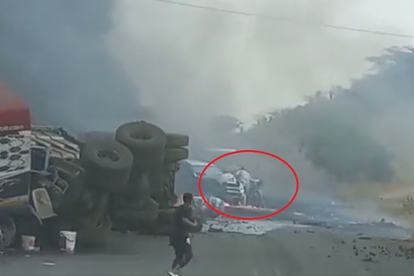 The horror crash in Ulundi has, so far, resulted in no fatalities – Photo: Twitter

The horror crash in Ulundi has, so far, resulted in no fatalities – Photo: Twitter

Scenes of an extraordinary and shocking nature have reached us from Ulundi in KZN, after a truck slammed into ANOTHER crashed vehicle on Monday. The smash-up caused an almighty fireball to erupt – but miraculously, no deaths have been reported in the secondary crash.

That’s thanks in part to one mysterious man, who could be seen dragging a woman to safety before going back to assist another passenger. The nasty accident took place where the R34 meets the R66, between Ulundi and Vryheid. The road has been closed in both directions.

After a truck had overturned earlier this morning, a second HGV ploughed through the crash site. Debris went flying as flames engulfed the road, catching several other vehicles in the carnage. A desperate scramble for safety ensued, but some were in dire need of assitance.

Step forward this unidentified hero. He was seen jinking his way through the inferno, before pulling open a passenger door. He helps a woman climb out of her crumpled motor, as she dashes towards safety. The man then returns to help another person, only for the video to end.

Although there have been conflicting reports about whether this crash was fatal or not, KZN EMS issued a statement within the last hour, claiming that all involved had ‘miraculously survived’. However, this information *could* change later in the day.

“This morning there has been another serious crash. This time on the R66/R34 near Ulundi in Northern KZN. There was an initial crash involving a truck that had overturned. A secondary crash then occurred when a truck crashed into this scene.”

Yet another Horrific accident between Truck and light motor vehicle at R34/R66 before Ulundi coming from Vryheid KwaZulu-Natal Province.

President Cyril Ramaphosa and Mbalula please something needs to be done. This is not normal ???? pic.twitter.com/J8PR9FKOor