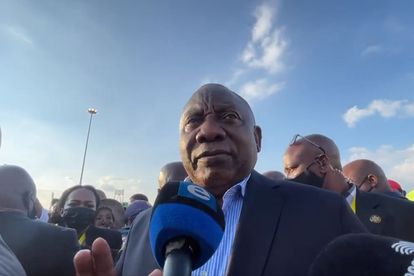 President Cyril Ramaphosa speaks to members of the media in the North West. Photo: Twitter @CyrilRamaphosa

President Cyril Ramaphosa speaks to members of the media in the North West. Photo: Twitter @CyrilRamaphosa

The Ukraine war is seeing thousands of lives lost and countless buildings destroyed. Its creating hundreds of thousands of refugees. On top of all of that, it’s creating diplomatic incidents for countries all around the globe. And here in South Africa, we aren’t able to escape either. After having a call with Russian President Vladimir Putin earlier this week, President Cyril Ramaphosa has again spoken out in favour of the Russian leader.

While taking questions from journalists during his weekend visit to the North West, Ramaphosa was asked about his call with Putin. According to the South African president, it was us who asked for the call with Putin. And in fact, it went so well, that Ramaphosa is “grateful” for the Russian leader.

“We had a very good conversation. He explained to me what is happening in that theatre of war. He also explained why they took the action that they took. And he appreciated the position that we have taken. The abstaining in the UN vote. And we abstained because the resolution did not address all the issues that would encourage mediation and peaceful negotiation.”

“We are grateful for the conversation that we had. It happened at our instance, we asked for it. Because we felt that we needed to hear from him.”

While in the North West, Ramaphosa also received his booster vaccine. After that process, he was asked about the future of the State of Disaster in the country. It currently comes to an end on the 15th of March. When asked about its possible renewal, Ramaphosa revealed that government is working hard to bring a “logical conclusion” to the matter.

ALSO READ – ‘I want it to end’: Ramaphosa speaks on future of State of Disaster

The president says government is now looking at medical or health measures that can be put in place instead.