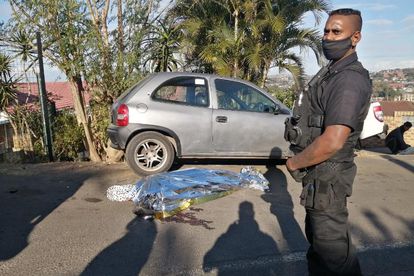 A taxi boss was assassinated, and two tow truck operators were shot and injured in a shooting in KwaZulu-Natal on Saturday.

Reaction Officers were dispatched to investigate and on arrival, found a man lying on the road bleeding from a gunshot wound to his head.

“A second male was shot on his left arm while his employer was grazed on his hip.”

Balram said, according to witnesses, the deceased is a taxi owner who resides in Reservoir Hills, Durban.

It is believed the man and his wife met with the tow truck operator to obtain a quote for panel beating a taxi when the occupants of a red VW Polo TSI (registration unknown) opened fire on them, said Balram.

“The vehicle then sped off in an unknown direction. The female was not injured.”

He furthermore said several spent 9mm cartridges were recovered at the scene.

Meanwhile, a house robber was shot and injured in a shoot-out with police on Friday in KwaNgcolosi near Durban.

“On Friday morning at 02:30, Hillcrest police officers responded to a report of a house robbery on Bhekisisa Road in KwaNgcolosi.”

She said the police on route spotted a vehicle that was reported stolen during the robbery.

“Upon seeing the police officers, the two men sped off, and a chase ensued. Following a shoot-out, the men’s vehicle overturned.”

Mbele said two men emerged from the vehicle and fled into nearby bushes while shooting at police officers.

“One of the men was injured and was placed under arrest.”

ALSO READ: House robber shot and injured in a shoot-out with police