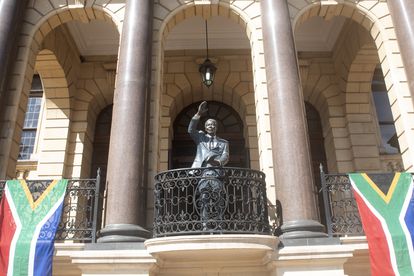 CAPE TOWN, SOUTH AFRICA – JANUARY 31: The City Hall is to be used by Parliament for SONA on January 31, 2022 in Cape Town, South Africa. The City of Cape Town made the building available following the devastating Parliament fire earlier this month. (Photo by Gallo Images/Brenton Geach)

CAPE TOWN, SOUTH AFRICA – JANUARY 31: The City Hall is to be used by Parliament for SONA on January 31, 2022 in Cape Town, South Africa. The City of Cape Town made the building available following the devastating Parliament fire earlier this month. (Photo by Gallo Images/Brenton Geach)

The upcoming State of the Nation Address promises to be a boisterous and unique event, with SONA 2022 taking place under unprecedented circumstances. Cyril Ramaphosa is set to deliver his speech later this week, and we’ve got all the key details and timings here.

For the first time in our history, the State of the Nation Address WILL NOT take place within the walls of Parliament. The National Assembly was burned to the ground last month – causing international concern.

Legal proceedings to determine who exactly is responsible for the blaze are ongoing, but with the fire happening so close to SONA 2022, an alternative venue was sounded out rapidly. Cape Town City Hall has been given the honour of hosting for this year, and officials are hopeful Parliament can be restored within the next 12 months.

When will the State of the Nation Address take place?

SONA 2022 is made up of a number of events, culminating in the president’s address to the house. From 17:00 on Thursday 10 February, we’ll have all the red carpet build-up, as our politicians dress to the nines and give media interviews.

From there, military displays follow, usually preceding the arrival of the president to the venue. This salute takes place just after 18:30. As Ramaphosa enters City Hall, the national anthem will be played at 18:55, with Cyril’s speech slated for a 19:00 kick-off. Barring any disruptions, SONA 2022 should be done by 20:15.

There are several ways to watch this State of the Nation address. All the major news channels on DStv (eNCA, Newzroom Afrika, SABC News) will have coverage of the event throughout the day.

If you’re unable to get to a television, you can also stream the event live on YouTube. We will be sharing at least one feed on our website come Thursday evening. However, if you’re only able to follow text updates, we’ve still got you covered – TheSouthAfrican will be live-blogging the whole thing.