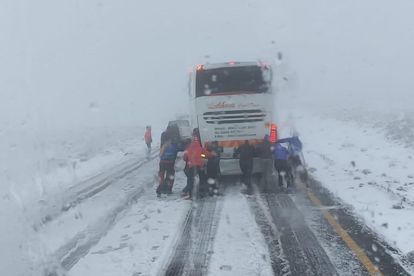 It is cold. It is very very cold. While we’re not quite in winter yet, parts of the country feel absolutely freezing this weekend. While flood warnings and rain pours down in parts of Gauteng, Lesotho has been blessed with some beautiful snowfall. Even though some snow was also expected in Drakenberg, it seems those mountains have remained snow-free as of Sunday morning.

Winter is coming! Snowfall touches down in Lesotho

Pictures sent to local storm watchers Snow Report SA, show that residents and visitors to the AfriSki lodge in the Lesotho mountains, woke up to some beautiful scenes. The snow in the area is also expected to continue to fall throughout the rest of the day.

Aside from the photos, there is also video of snow on the mountain pass. The footage was filmed on Sunday morning as some of the busses left the AfriSki resort in Lesotho. According to the latest report from the SA Weather Service, the Drakensberg might still manage to taste snowfall. Temperatures in the Drakensberg area are set to drop to -2C from 8PM on Sunday.

Snow on the mountain

“This wet spell will be accompanied by cold to very cold conditions over the southern and south-eastern
interior of the country on Friday, spreading to the central and eastern interior by Saturday. Moreover,
light snowfalls can be expected over the eastern and southern parts of Lesotho and the surrounding
Drakensberg mountains on Saturday evening as well as overnight Sunday night.”

The SA Weather Service has also issued a disruptive rainfall warning for Sunday. They’re warning of dangerous conditions across Gauteng until late into the night. Localised flooding and poor driving conditions are expected.