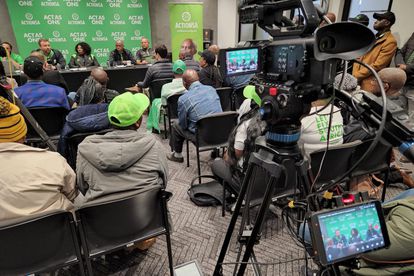 Patricia Kopane is expected be unveiled as an ActionSA member ‘within days’ – Photo: ActionSA / Twitter

Patricia Kopane is expected be unveiled as an ActionSA member ‘within days’ – Photo: ActionSA / Twitter

August is traditionally when football’s ‘Transfer Window’ opens, allowing teams to exchange players and shake-up their personnel. However, it seems South Africa’s politicians are following suit – and this senior DA member is now in talks to join Herman Mashaba’s ActionSA party.

Patricia Kopane joined the DA almost 20 years ago, and she has served her time as both an MP and the party’s provincial leader in Free State. However, Kopane has revealed that ‘she no longer believes’ the party has the same intentions from when she first signed-up.

The defecting MP, who has a background of working in the healthcare industry, spent 13 years as a member of the National Assembly. But Kopane now feels that ‘she does not belong in the DA’. Although her reasoning is largely vague, it seems a strong disconnect has emerged.

The departing DA member is set to ‘open a dialogue’ with Herman Mashaba, who also left the Blues in sensational fashion almost three years ago. It’s likely that ActionSA will offer the political veteran a senior role within their ranks, as they look to expand their national footprint.

ActionSA ‘in talks’ with DA defector

ActionSA took the 2021 Local Elections by storm, and proved to be a very popular alternative in each district they ran for. The group is now part of coalition governments in several municipalities, and there are early signs that these ‘Actioners’ could play the role of kingmakers in 2024.

“I have taken the decision to resign as a member of the DA. The turth is, I no longer believe the DA is the political vehicle that I joined in 2003. I do not feel like I belong here, but wish nothing but the best to many good people who remain in the party.”

“I cannot, at this point, imagine walking away from politics. Therefore, I will approach ActionSA within the coming days to become a member of this exciting new party. In doing so, I will begin talks with Herman Mashaba, to assess what role I can play for the party.” | Patricia Kopane