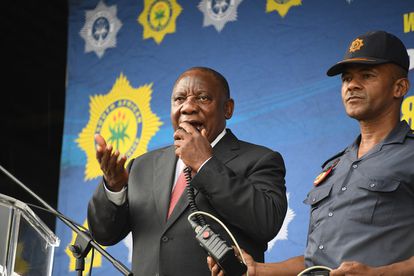 Crikey. A one-time senior SAPS official says she was recently targeted by hitmen, after the whistleblower threatened to go public with some damning information about corruption within the police force. Her purported evidence implicates Cyril Ramaphosa AND Bheki Cele.

SAPS whistleblower accused government of ‘trying to kill her’

Patricia Morgan-Mashale claims to be sitting on a number of explosive bombshells. According to the whistleblower, two high-ranking cops – including a serving general – are actually foreign nationals. That, in her words, is the tip of a very corrupt iceberg…

Specific cases of nepotism, multi-million rand fraud, and forgery have been raised by PMM. Her full account is truly something to behold. However, in the early hours of Sunday morning, she went public with the details – after allegedly surviving an assassination attempt.

“This evening, I was chased by a black Ford Ranger. It was like an action movie. I was so shocked I couldn’t even drive to a police station. I felt like going there would also get me killed. It felt like I was a hunted animal. This wasn’t ordinary criminals, it was from the government.”

“They knew I was coming on the show this evening. When I first blew the whistle on SAPS corruption, there was another attempt on my life. I had to go into hiding. They will not let me apply for protection. My location has already been compromised.” | Patricia Morgan-Mashale

It is Morgan-Mashale’s firm belief that this attempt to silence her came from the very top. Given that Cyril Ramaphosa is implicated in some of the accusations – and that no formal protection has been forthcoming – the whistleblower says the president ‘should be arrested’ if she is murdered.

“Hit men tried to kill me tonight and we both know who is behind this second attempt on my life. Let me put it on record now for the whole world to know… I am a whsitle-blower, who has information about massive corruption at SAPS. I have already applied for protection.”

“Should anything happen to me, please put it right in front of the door of Mr Cyril Ramaphosa. Arrest him and charge him with my murder because he will be an accomplice in my assassination. If I die, your political ambitions dies with me. I will keep on exposing you.”

“President Ramaphosa, do your worst. I am not dependent on you for political survival. I took an oath of office to blow the whistle on corruption and come hell or high water. Your silence is an indication that you are also compromised. Soon, I will have the proof.” | Patricia Morgan-Mashale